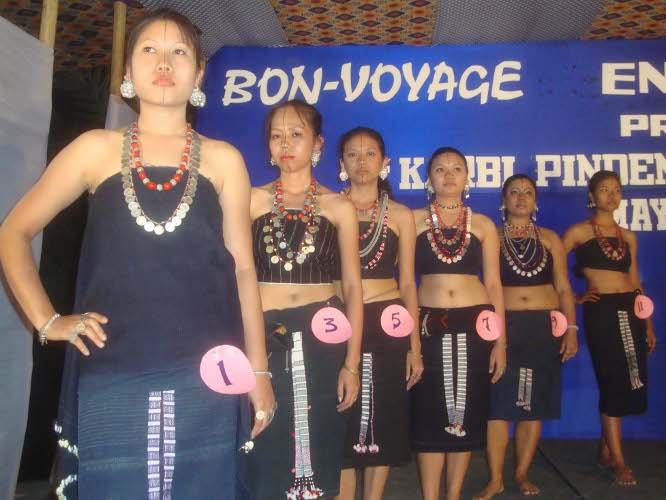 At a time when fashion shows are breaking grounds in big cities like Guwahati along with other towns, one would wonder as why the beautiful fashion loving people of Diphu has been deprived. Disturbance and insurgency scenario is the main reason that had overshadowed that beautiful spirit of the people. But the jinx has been broken. For the first time Diphu has jumped into the fashion scenario and that also with a bang but without keeping aloof their tradition. Thanks to the improvement of political scenario and with recent laying down of arms for dialogues by the KLNLF (Karbi Longri National liberation Front), people have found a reason to celebrate. Another militant group - UPDS (United People’s Democratic Solidarity) is already in ceasefire for quite some time.

Partial peace in Karbi Anglong is heralding new hopes among the young generation. The bon voyage entertainment group of Diphu had taken the first initiative to showcase the Karbi traditional attire through a traditional fashion show held on May 30, at the premises of Hotel Singhasan. A decent crowd witnessed the fashion show where 16 models walked the ramp with both traditional and modern Karbi dress “Pini-pekok”. Most of models were first timers but the well choreographed show was good enough to attract any professional photographers and videographers. The elder crowd were proud to see the younger generation putting on the Pini-Pekok, and mothers also encouraged their daughters to walk the ramp. "This is very nice to see a Karbi traditional fashion show being organized and I on my own brought my daughter to participate here and so that she gains some knowledge, says Dipti Terangpi, mother of Manisha Rongpapi.

Wearing the Arnanan (silver finger rings), No-theng-Pi (ear rings), Lekhiki (necklace made of silver coins), Lekpangkhara (necklace made with red balls) has been a first hand experience for most the young models, but they left no stone unturned to make them look a very perfect traditional Karbi lady.

The “DUK” is another unique symbol of their tradition, but perhaps in real sense one would not like to have a permanent one on their faces. The “DUK” is a black line that is drawn from the forehead down to the chin, which divided the face in two halves. In the early days the beautiful ladies would tattoo a “DUK”, in their face so that they look ugly and thus can get away from the eyes of the powerful neighboring rules who would often lift the beautiful girls and thus it was no less than a curse.

Today the “DUK” has become a part of Karbi tradition, and one feels proud to showcase it.

Apart from walking the ramp in the very traditional the models also exposed the modern Karbi dresses that has more modern imprints of fashion and thus sending the message of importance of transformation and up gradation of traditional dress. Chandra Sing Kro who was one of the members of the judging committee in the competition says that it has become very important to upgrade the Karbi traditional dress in the modern era of competition.

Kiri Terang, the young organiser and the director of the Bon-Voyage entertainment group of the fashion event says , “we are unemployed youth and we want to change our place and we tell others that many other things can be done rather joining an extremist group.” Politicians are the worst things in Karbi Anglong, but we want to change the common people. He adds.

However organizing programmes during the evening has been a past history in Diphu since long after insurgency got introduced in Karbi Anglong. But off late the people are seeing twilight of peace on the streets and has decided to make romance with it. After a gap of 30 years a theatre group had also came to Diphu, I couldn’t imagine, and things are changing, says Mozar Ingti, who had come to enjoy the fashion show with his family.

The first traditional fashion show seems to be promising for more in the near future as it had decided to select three winners, and thus keeping the door open for mega contests that would encourage many more participants. Omphu Rongpipi won the crown while Malin Terangpi and Larnem Ronghangpi were adjusted the first and second runners up respectively. I have participated in the competition because friends say I am fat and I wanted to prove that I can do something, says Larnem, the second runners up. Hope her enthusiasm would be a source of inspiration for many to join the competition in the near future in the spirit of Karbi traditional fashion show.

Permalink Submitted by Mosphy M.Taro on Mon, 14/06/2010 - 17:48
I like Fashion Parade and I'm delighted the beauti pageants of the Karbis/young karbi girls/nimso.From this point of view it shows that Karbis are blessed with rich cultural heritage descended from fore fathers and mothers since time immemorial.Apart from this the Karbis are known for Mild Nature which means peace loving nature, they want to avoid chaos and blood shed ofcourse in time of emergency may be considerable to show off like others. But to be a real karbi we don't need to ape what others do 'learn like others but behave like none' says one of the educationists. I would humbly ask a question to all the Karbis who settled different part of MEGHALAYA, ASSAM, ARUNACHAL PRADESH, NAGALAND AND BANGLADESH whether absence of EDUCATION in society will bring development or not instead of more fashion show more fashion of proper education. TO EDUCATE CHILDREN, EDUCATE LEADERS, EDUCATE WORKERS AND EDUCATE POLITICIANS would bring more sensible participation in the complex world of todays. I am a Karbi I feel proud of beloing to this tribe but sometimes I feel bad when Karbis have shown less interest in education in lieu of that land up in nonsense activities> "IF YOU PLAN FOR ONE YEAR PLANT RICE, IF YOU PLAN FOR TEN YEARS PLANT TREES AND IF YOU PLAN FOR HUNDRED YEARS EDUCATE PEOPLE"- Chinese Proverb. Kardom Mosphy Taro - N.E.H.U

Permalink Submitted by Rongmon on Thu, 17/06/2010 - 01:51
Very true Taro. But we need to focus on vocational educational and set up agriculture university so that Karbi Anglong develops a n agriculture-based economy and agro-based industries. Education which does not help youths to utilize local resources and instead work for MNCs will take us nowhere. Karbis are the first settlers of North-east India and present Assam. Naturally they are found all across north-east, hills or plains, in small numbers though.

Permalink Submitted by bikram hansey on Thu, 16/09/2010 - 15:32
thank a lots to all the organising members for making the pragrame happen withiut any failure..keep on doin the goood jod..for upliftment of our karbis traditional.god blessed

12 Jun 2015 - 11:46am | AT News
The Centre sounds red alert in the entire north eastern region apprehending terror strike to counter the intensified counter insurgency operation in Myanmar.The Union home ministry is believed to...