Guwahati: A 12-party front in Assam is staging dharna in Guwahati demanding steps to address the problems confronting the state for years.

The dharna began at the Dispur Last Gate at around 7 in the morning to end at 5 in the evening.

Speaking to assamtimes, leaders here say the Government must ensure that those who came after 1971 from across the Indo-Bangladesh border must go.

The parties further aks the government to hold talks with United Liberation Front of Asom (ULFA) to end the decade-old insurgency in the state. 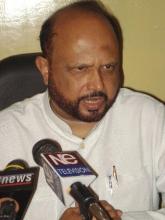 21 Dec 2015 - 10:58pm | AT News
Assam will go to the two or three phase assembly polls before April 10 next year. This was the impression of the full bench of the Election Commission which is on a two days visit to the poll bound...

12 Jul 2014 - 12:34am | Hantigiri Narzary
The two member of a family were killed when lightning struck them on Friday morning at Taigirguri village under Serfanguri police station in Kokrajhar district. Athem Narzary and his son...