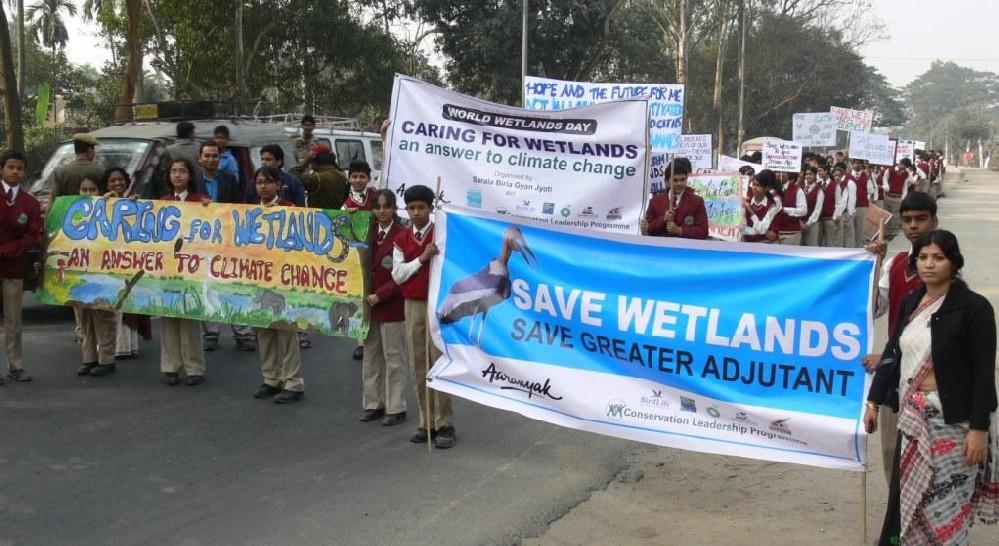 “Caring for wetland –an answer to Climate change”, “Save Wetland Save Greater Adjutant”, “Wetlands are the Kidney of an ecosystem” - with these important themes Aaranyak in collaboration with Sarala Birla Gyan Jyoti School has celebrated World wetlands Day on February 2 through a rally in the Jalukbari area. After this rally a petition was submitted to District Commissioner, Kamrup Rural by the students of Sarala Birla Ghyanjyoti and requested him pass the message to Chief Minister of Assam to conserve 3000 odd wetlands of Assam which are the store house of our Biodiversity.

This programme was followed by an additional daylong programme at Shankardev Sishu Niketan at Dadara where students of this school along with the students of Sarala Birla Gyanjyoti were briefed by Aaranyak in the importance of wetlands and their need for conservation to save our environment. Dr. Rathin Barman, a prominent wetland scientist addressed the students and had interaction with the students on various issues relating to wetlands of our state. Ms. A. Goyal, Principal of Sarala Birla Gyanjyoti school has addressed the students and she thanks the local villagers who are protecting Greater Adjutant, a globally endangered bird, which makes nests in this villages. Students also felicitated the proud nest tree owners of this globally endangered bird in the occasion. Purnima Devi Barman , a researcher from Aaranyak also spoke in the occasion and made appeal to the students to be a part of the wetland conservation movement which will save many endangered species and plants including Greater Adjutant. She said in future Dadara can be a tourist hub to see this endangered bird by various bird lovers from the globe. “Without wetlands these bird has no future and will vanish from our earth. We must protect wetlands to save this bird”, she said. In the daylong programme was co-organized by Sankardev Sishu Niketan and Transition Academy in collaboration with Aaranyak and Sarala Birla Gyanjyoti School.

Dadara village was selected for this years World Wetland Day celebration to highlight the needs for the protection of wetlands to conserve the globally endangered bird Greater Adjutant. In the world today about 600 of this bird are left in Assam and more than 50 percent of its global population can be found in and around Guwhati City.

Who is Rome Neog in Arunachal?

15 Dec 2015 - 10:04am | AT News
Romeo Neog, the name of a person from Assam seems to have taken the centre stage of political storm in Arunachal Pradesh. But who is he? What is he? Where is the person? These are the questions that...