Assam Association, Delhi has celebrated the 61st Independence day at their Cultural Centre Srimanta Sankaradeva Bhawan located at Qutub Institutional Area. This was the second consecutive year that the association has been celebrating the occasion.

The National Flag was unfurled jointly by the President and General Secretary. Speaking on the occasion, the President Mr. A Barua said that this is a very historic occasion as India celebrates its Diamond jubilee year of independence. It was in the same year a few people from Assam formed the 'Assam Sangha"- which later was renamed as "Assam Association, Delhi". India has made tremendous progress against many odds. It is growing at a very rapid pace and will soon become a 'super power'. At the same he said 'Assam is fighting a battle for survival and is passing through the worst phase. The population of Assamese people have increased to many thousands now. The need of the hour is to build a new Assamese society free from casteism, religious fanaticism, which will embrace people from all races and creeds, on the tenets of Srimanta Sankaradeva.

Mr Sarat Barkakati spoke about the social commitment the well entrenched people in Delhi has for the society where they were born. Mr. Manoj K Das spoke about the advances India made in last 60 years and the road ahead. He lamented the diminishing image of Assamese as patriotic Indians dover the years. He also expressed concern about the 80% Indians living on Rs. 20/- a day. There can be social upheavals or disturbances like the naxalite movement, if the haves don't want to share part of their prosperity with the have nots.

Dr Nilamani Sarmah spoke about the spirit of Indianness and the pains founding fathers have taken to attain freedom. Lastly, Dr Hareswar Deka, who has recently taken over as the General Secretary thanked the audience for turning up on the occasion.

Permalink Submitted by OMAR LUTHER KING on Mon, 20/08/2007 - 06:36
The AA Delhi did well in celebrating the 61st Independence day. How I wish I knew about the programme. I would not have missed it if I were told about it. Much advance publicity should be given to programmes that are planned by AA Delhi so that more and more Assamese resident of Delhi along with their local friends and neighbours are able to attend such functions and make them grand success. OMAR Omar Luther King B-60, Parijat Apts. West Enclave Pitampura DELHI 110034 Phone: 011-27030065 E-mail: calloflove@yahoo.com 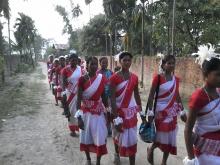 2 Oct 2015 - 6:57pm | Hantigiri Narzary
Over 1000 delegates from various district of Assam thronged Kokrajhar to attend the 12th Adivasi Mahasabha which got underway on Friday. Organised by the All Adivasi Students Association of Assam,... 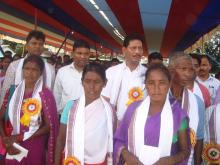 25 Jul 2017 - 11:56pm | Shajid Khan
“If there is any community in the State which is exploited and deprived economically and socio-politically, it is none other than the Adivasi community.” This was observed by Rihon Daimari, State...