Stop proposed bill to do away with Customary Laws

It is understood from newspaper reports that the Congress government under you is proposing to scrap customary practices in the state and a bill in this matter is being introduced in the current budget session. In this regard, I on behalf of the tribal communities in Assam in general and the hill people of Karbi Anglong and NC Hills in particular, would like to express my strong opposition to any such dangerous move which is designed to destroy the unique customs and practices of these tribal communities. The Assam government by its proposal to do away with the customs and traditions of these communities is trying to destroy the very foundation of their existence.

As you would appreciate, India as such was ‘not under any formal system of governance until 1914 when the Government of India, foreign and political department notification was issued. Before 1914, customs and traditions were the prime law of the land. Customary practices and were the guiding features of many enactments made by the British.’

Perhaps you are also aware that —‘Customary rights by definition cannot be the creature of a written instrument. Neither was the principles of customary laws codified nor were the said customs listed out separately by legislation in India. However, customary rights were recognized as early as 1872, when the Indian Evidence Act was enacted. Indian Evidence Act (Section 13) deals with the facts relevant for the proof of customary law. Likewise Section 10 to 16 of the Assam Forest Regulation 1891 recognizes rights to pasture and forest produce at the stage of settling rights before a given area of forest is classified as Reserve Forest. These rights are, no doubt, customary rights’, it is also to bring into your notice that it would be grieve violation of United Nation of Rights for Indigenous People ( UNDRIP).

In the light of the above, what the Government of Assam is proposing is fraught with dangerous consequences. Instead of making the legal system better for the indigenous communities without infringing upon their customs and traditions, the current proposal is directly aimed at taking away even the last vestiges of their existence, which is tantamount to blatant human rights abuses by the Government of Assam. In another word, the proposal to do away with the indigenous customs and traditions is nothing but a direct, naked and criminal assault on the indigenous communities who have been demanding various forms of autonomy, as they understood that their fate is not safe under your government.

I therefore appeal to you to desist from such move. It is perhaps needless to remind you that what your government is contemplating to do seems to be inspired by the language bill of the 60s, which had disastrous consequence for the erstwhile Assam.

Permalink Submitted by mizum myodu on Tue, 07/07/2009 - 15:14
It is hurtening to hear that there is a move to do away with the customary laws which are the cheapest and most expedetious justice giver. The simple innocent tribals wont be able to understand the intricaies of formal laws which would complicated the life further already ridden with multiple problem some of them being state sponsored. Thus the move tends to satisfy non and it seems to be made to bring hardship to the tribal populous. The act/ proposed move is condemmed to be unmindfull and against tribal interest and Chief Minister should re consider the move to kill/erase the customary law which is as old as the tribals

Permalink Submitted by Dorika on Wed, 08/07/2009 - 14:38
If Muslims are allowed to follow the laws of Sharia/ Quran in secular India, why are tribal and Hindu communities not allowed to do so?

Police firing toll goes up to 4

23 Aug 2014 - 9:46pm | AT News
Yet another person died on Saturday three days after he sustained injury in Golaghat police firing.  Identified as Gokul Barik, the 20-year-old daily wage earner succumbed to his injuries in... 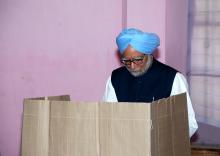 24 Apr 2014 - 12:46pm | AT News
Prime Minister Dr Manmohan Singh is confident that his party will get majority in the Lok Sabha polls.Talking to reporters after casting his vote in Dispur on Thursday, Dr Singh who represents Assam...

12 Jan 2013 - 11:39am | Ritupallab Saikia
At a time when a lot of concern has been displayed from several indigenous organizations of the state regarding the incessant killing of one horn Rhino and presence of a large number of...