Workshop held on knowledge sharing through IT for rural development 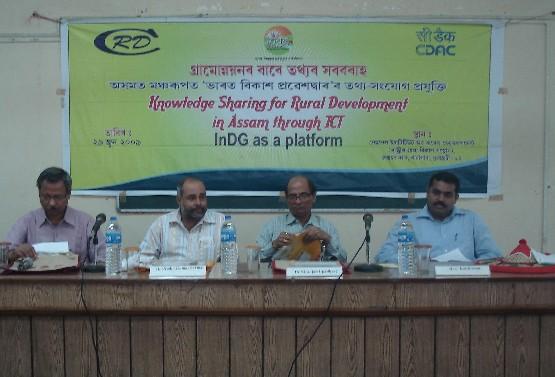 Earlier, the Executive Director of CRD, Dr. Pradip Kumar Sarmah in his welcome address highlighted the various initiatives of the NGO undertaken for the upliftment of the deprived section of the society. He also briefed about the success of the Rickshaw Bank project, which received worldwide recognition for its innovative technique of empowering the underprivileged section of the society. The inaugural function was also attended as Guest of Honour by Dr K Haloi, Dy. Director of National Institute of Rural Development. In his address, Dr Haloi hoped for a long-term association of NIRD with CRD and C-DAC to make this new initiative a great success in entire state of Assam. Dr. Prabodh Bora, one of the Scientist from the Assam Agriculture University (AAU), Khanapara campus who represents the Vice Chancellor of the AAU, has also address the gathering as a Guest of Honor and looking for a long time partnership with the InDG. Mr. Satish Kalra, Circle Head of Punjab National Bank (PNB) has expressed their willingness to join hands with the InDG in the coming days.

The Workshop was formally conducted by two experts from Hyderabad Head Office of the C-DAC, Dr C Kathiresan and Sri Jitendra Prasad. In their respective audio-visual interactive presentations, both the experts highlighted the various initiatives of the C-DAC undertaken at the initiative of the Ministry of Communications and Information Technology, Government of India, and their software contents developed at the various regional languages in India. Through this workshop, the CDAC has formally started its IT programmes through the Assamese language for the benefit of the local grassroot level workers in Assam.

As part of the workshop, the participants were distributed free software of Assamese true type fonts, developed by CDAC in collaboration with Department of Information Technology, GOI, and also demonstrated their fruitful utilization for content development of InDG project of Government of India.

14 Jun 2008 - 1:25am | editor
A 32 year person was injured when he was arrested by police accusing him of trying to rape a minor girl at Chamata in Nalbari district on Friday. The arrested carpenter was caught red handed while he...