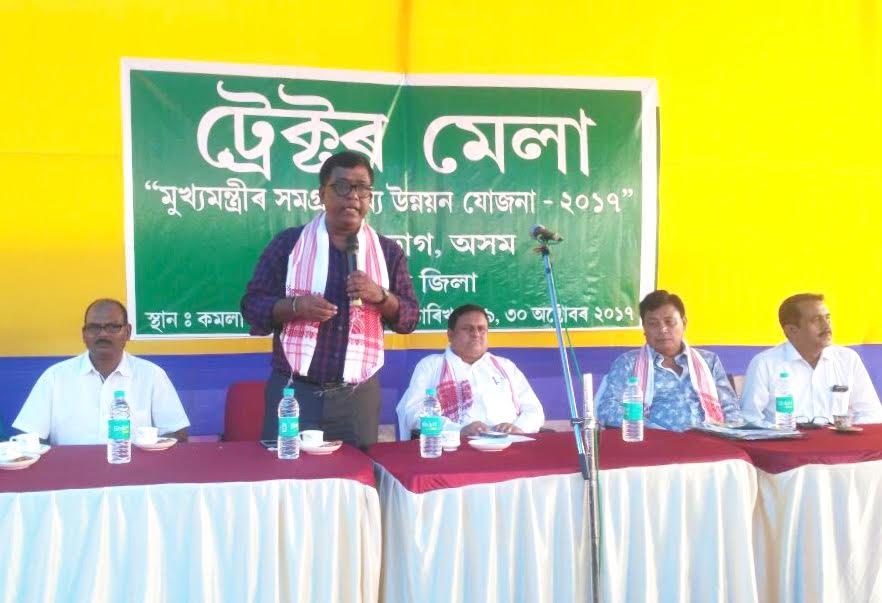 In his inaugural address on Sunday, Borthakur highlighted the importance of CMSGUY and appeals the farmers to come forward to take the advantage of this mega mission. Mowsam Hazarika, Assistant Director of Agriculture attended the Mela as Observer and addressed the gathering . In his address, Hazarika said that need of mechanisation in agricultural sector is very important for doubling the farmers income. He stated that, “Government of Assam, in pursuance of the Assam Vision Document 2016-2025 has been initiating series of developmental activities in order to improve the economy, development and create employment in the state.One major focus area is to stimulate growth in rural economy as agriculture is the mainstay of Assam. Therefore, massive investment ideas were proposed in rural areas for complete rural empowerment in a period of 5 years to double the farm income.It was announced in the budget speech of 2016-17, that a "Mega Mission", called “Chief Minister Samagra Gramya Unnayan Yojana” (CMSGUY) would be taken up to be implemented over a period of 5 years from 2016-17 and culminating in the year 2021-22 coinciding with 75 years of India's Independence.”

The main objective of the Mega Mission is to double the farm income, in unison with the vision of Prime Minister of India. This was sought to be achieved through saturation model by covering each revenue village through focused interventions in (a) Direct economic activities, (b) Logistic support including market linkages, and (c) Community support.

It may be mentioned that 29 different models of tractor displayed and 148 nos. of farmer groups participated in the Mela from Biswanath and Behali LAC .

13 Apr 2014 - 9:23am | AT News
Once again miscreants from Arunachal Pradesh unleashed terror among the local residents of Sonari raising doubts over the sincerity of the police forces posted along the inter state border.The...

9 Aug 2017 - 1:31pm | SN Sangma
Once again rebel diktat seems to have muffled the Independence Day celebrations slated for August 15. GNLA, a prominent Garo rebel outfit operating in Meghalaya along with some pockets in Assam...