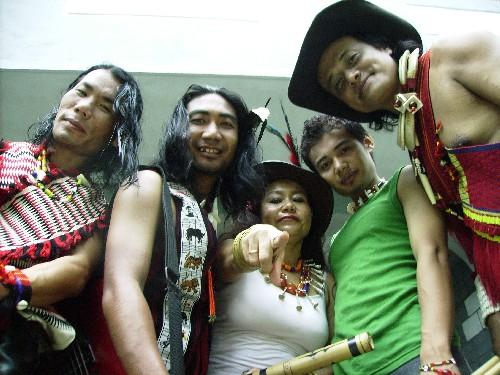 In a defining moment for the regional music scene, the newly floated Rockarolla Music Society would be formally launched with an international concert at Hotel Landmark in Guwahati on April 12. The highlight of the show would be performances by Jia-Yi He, the numero uno Harmonica virtuoso in the world, and Abiogenesis, the only experimental Indian rock band to be nominated for the prestigious Grammy Awards. The show would also feature Strange Frequency, a unique musical concept from Shillong.

Jia-Yi He, a world-class harmonica virtuoso, has received numerous awards in international festivals and competitions in England, Germany, Israel, Japan and United States. He has served as a member of the judging committees in the Asia-Pacific Harmonica Competition in Taiwan, Malaysia and Hong Kong. Mr. He has appeared as a soloist with the China National Symphony Orchestra, China National Ballet Symphonic Orchestra and the Nassau Pops Symphony Orchestra. He has appeared at many television stations including ABC-news, News 12 Long Island, Queens Public Television and Sino Television in the United States. Mr. He has recorded harmonica music for a number of movies, radio stations and CDs. He was invited to perform at the General Assembly Hall at the United Nations. The New York Mets have chosen him to perform a pre-game show at Shea Stadium 2007. Currently, Mr. He is a harmonica teacher at the Turtle Bay Music School in New York City.

Besides He, the show will also feature Abiogenesis and Shillong band, Strange Frequency. Bound together by the husband-wife duo of Moa Subong and Guru Arenla, Abiogenesis is the arguably the only Indian experimental rock band to have been nominated for the prestigious Grammy Awards. Besides creating a perfect fusion of western rock with Naga tribal beats, the band has successfully managed to showcase the best of regional sounds in front of a global audience. They have developed their own brand of music - which they like to call ‘Howey music’ – and have invented the bamhum – one of the very few musical instruments to have been developed in the world over the past century. On the other hand, Strange Frequency, is a new concept of seasoned Khasi session musician Larry. Consisting of three bass guitars and a drum set, the entire project leans heavily towards a new brand of experimental music.

The event, which has been made possible with the support of US-based Thomas Music and Suzuki Musical Instruments (India), will mark the formal launch of the Rockarolla Music Society. Harmonica lover Shantanu Bhagawoti said, “This is an excellent opportunity for the people of Guwahati. Bringing a musician of Mr. He’s stature is no mean task and I extend my heartfelt thanks to the Rockarolla Music Society for arranging a show of this magnitude.”

The show will mark the formal launch of the Rockarolla Music Society. Flamboyant guitarist of yesteryears and a member of the unique concept, Utpal Barsaikia says, “The Rockarolla Society is a group of musicians, writers, artistes, journalists, theatre workers, sportsmen and working professionals from various disciplines brought together by the love for music and Arts. Formed with the basic objective of promoting good musical forms and local talents, the society also aims to bridge the gap between different musical genres and art forms. The basic objective of the society is to instil the love for Arts and a spirit of receptiveness towards new ideas and Art forms among the people of the region.”

The society is made up by some of the most talented and creative artistes of Northeast India. “The all-encompassing reach and outlook of the society can be gauged from the fact that it has reached out to as many as three generations of musicians of the region. In fact, this is what the society plans to do – bring the different generations of musicians and music and Art lovers on a common platform,” said DN Dutt, veteran musician and former Director General of Police, Assam, who happens to be the chairman of the society.

The society would be formally launched by Maharaja Pradyut Debburman, the King of Tripura, on Sunday and he would also release Northeast Beats – the first music journal of Northeast India. Noted writer and Northeast Beats Editor Rashmi Narzary says, “Northeast Beats in an attempt to work towards the documentation of the regional music scene, besides chronicling musical, art and literary events and leanings of the region. Besides, jamming sessions, gigs, quizzes and musical concerts will of course remain the soul of Northeast Beats and the society.” Noted music critic and stage personality Satyakee D’Com Bhuyan is the editorial consultant of the journal, while cultural journalist Aiyushman Dutta is also on board as the executive editor. Dutta says, “Besides just chronicling the music scene, Northeast Beats is an attempt to reacquaint ourselves with our own traditions, its richness. Using music as the springboard for all future endeavours, we plan to work towards inspiring another generation of men and women to showcase the region’s assets on one hand, and bring its youths to be thinking people, sensitive people, and above all follow their conscience in bringing about a socially just society.”

Besides jamming sessions, gigs, quizzes and musical concerts, research work is another thrust area of the Rockarolla Music Society. “Headed by renowned tribal folk musicologists and research activists -- like Reuben Mashangva of Manipur, Moa Subong and Guru Arenla of grammy-nominated Naga band Abiogenesis, amongst others – the society is actively looking into the development and promotion of ‘experimental music’,” said Narzary.

The Rockarolla Music Society has arranged for complimentary dinner to be served for all the invitees. Entry passes have been priced at Rs. 500. For entry passes, please contact 9957193228 and 9864138282. So be there at Hotel Landmark on April 12 and watch history in the making!

24 Jun 2011 - 8:16pm | editor
Finally, police have arrested KMSS leader Akhil Gogoi in connection with the Dispur police firing on Wednesday. Gogoi was picked up by police from his Nizorapara based residence an hour before a...

11 Jun 2012 - 12:49am | editor
The Opposition Asom Gana Parishad would launch an agitation across the state on June 12 in protest against construction of big dams, price rise and corruption. Addressing a press conference in...