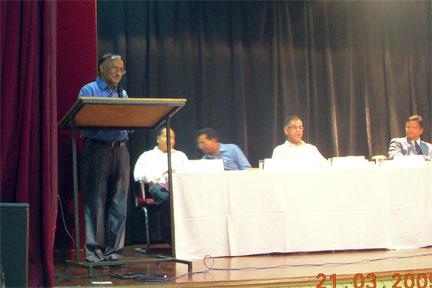 Assam Association, Delhi felicitated three great sons of Assam in a graceful function at Srimanta Sankaradeva Bhawan. The function coincided with the inauguration of the recently completed Auditorium of the Association, located at Qutab Institutional Area, New Delhi. Three eminent persons are Dr Ramesh Deka- who is appointed Director in AIIMS, Mr. Hari Shankar Brahma- who has been appointed as Secretary to the Government of India and Mr Anjan Gogoi, who has been promoted to Air Marshal in the Indian Airforce.

President Sri Atul Chandra Barua welcomed the guests and informed demise of eminent poet, musician and lyricist Sri Bhabendranath Barthakur. The meeting condoled the death of Sri Barthakur and stood in silence to pray for the departed soul. He then introduced the eminent sons of Assam Dr Ramesh Deka, Mr. Hari Shankar Brahma and Mr Anjan Gogoi to the members. After a brief introduction, the personalities were felicitated by the Association.

Dr Ramesh Deka has recently taken over as the Director of AIIMS, the topmost Medical Institution in India. Dr Deka did MBBS from GMC, after ISc from Cotton College; and later did MS from AIIMS. He also did higher studies from USA He was head of ENT department and Dean of Studies, before being appointed Director of the prestigious. Dr Deka described his journey to the topmost Medical position in the country. He is world famous for conducting more than 200 cochlear implant surgeries.

Mr H S Brahma, IAS was born in Gosaigaon of Kokrajhar district. He did schooling from Don Bosco School, Guwahati and graduated from St EdmundÃ¢â‚¬â„¢s College, Shillong. He joined IAS in 1975 and belongs to the Andhra Pradesh cadre. He is currently serving as Head of National Disaster Management Authority. Mr Brahma, in his acceptance speech told frankly that this is the first time he has been honoured publicly for his achievements and that too by his own people. He proudly declared that Assamese people have come to be known in India for their frankness, diligence and work ethics. ItÃ¢â‚¬â„¢s only a matter of time that they will shine in all spheres of national activities. He mentioned that they are one of the best professionals in the world.

Mr Anjan Gogoi, who is son of former Chief Minister of Assam late Sri Keshab Gogoi, is from the first batch of Goalpara Sainik School. He is the second person to become Air Marshal after Mr Pankaj Borbora, who is the C-in-C of Western Command. Mr Gogoi has the chance to go to the top of the Indian Air Force.

The meeting ended with a round of applause for the achievers, whom the new generation can look upon as role models. Earlier a Borgeet composed by Mahapurush Srimanta Sankaradeva was rendered by Smt Devina Saikia. Mr Bhabananda Borbayan, guru of the Sattriya School accompanied on Ã¢â‚¬ËœkholÃ¢â‚¬â„¢.

Permalink Submitted by Taku chatung on Thu, 28/01/2010 - 04:50
they are not only proud sons of north east india but also sons of whole norht east india. i for from Arunachal pradesh salute thier achievement in thier chosen field . i do hope our younger generation will look forward them as role model in days to come.

Permalink Submitted by Dorika on Thu, 28/01/2010 - 15:38
Congratulations to the the trio and Assam Association for selecting the right persons for the prestigious award and honouring them.. 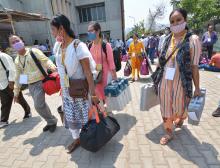 20 Jan 2019 - 6:43pm | AT News
In a move that defies the Supreme Court order, the Meghalaya Government has issued permission again to transport coals in the state. In it modified order, the NPP-led coalition Government permitted...