The people of Lanka and Lanka Byabasayee Samiti demand the Railway Minister Lalu Prasad Yadav necessary orders for the stoppage of the Kamrup Express , the Jana Shatabdi Express,the Chennai Express and the Amritsar Express at Lanka raiway station within a short period.

The Byabasayee Samiti submitted a memorandum to the Railway Minister through Union Minister Manishankar Aiyar and Chief Minister at the time of foundation stone laying ceremony of Calcom cement at Lanka recently. The Samiti also demanded solution of various problems of Lanka area through the memorandum.

It may be mentioned that before the conversion of the metre gauge into broad gauge , the Kamrup Express had regular stoppage at Lanka station ,but unfortunately after the introduction of the broad gauge , the Kamrup Express has ceased to stop at Lanka , causing untold sufferings and harressments to a great number of passengers of the Lanka station as the Station covers not only the Lanka town people but also the vast areas of southern part of Karbi Anglong district and North Cachar Hills district.The people of these areas are totally dependent on Lanka railway station for availing themselves of the train services. But regretfully except the Brahmaputra Mail and a few local trains like the Inter- city Express ,etc.no other trains for long journey stops here.As a result , the passengers who haveto travel to far away places like Allahabad , Kolkata, Chennai etc. have to suffer great inconveniences. 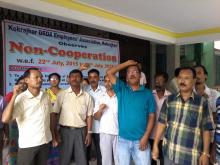 22 Jul 2015 - 2:13pm | Hantigiri Narzary
The functionings in Kokrajhar DRDA office came to a standstill on Wednesday when the employees staged dharna raising a set of demands. At around 10 in the morning all employees thronged in front of... 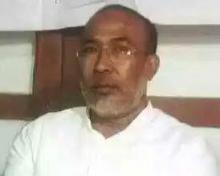 Biren Singh to be Manipur CM

22 Apr 2012 - 2:56am | editor
The ceremonial lamp was lit by Mrs Gayatri Borthakur and Srimati Chapala Bhuyan and rich tribute was paid to late Dr Bhupen Hazarika. This was followed by a variety of cultural items which kept...