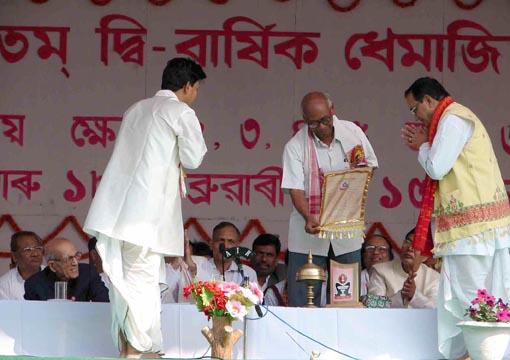 The Sukapha Samanya Khsetra in Dhemaji saw a massive gathering at the fourth day of the Asom Sahitya Sabha session on Tuesday where president Rong Bong Terang stressed the role of litterateurs in infusing new life to Assam…and its language and literature.

Lakhs of people thronged at the session site early in the morning to attend the session where the focus of attention was a cultural procession which was taken out in the morning with new president Rong Bong Terang. The outgoing president Kanak Sen Deka broke the tradition giving Terang his new company.

In his address, the noted litterateur Terang said Assam and the Assamese will be remaining alive with the rich language and culture as long as the Barhmaputra remains intact. He further deplored the Dhemaji blast that rocked the north Assam three years back.

Before that the first open session at Dhemaji which was inaugurated by Padmasree Satyabrat Sashtri who appreciated the people for the huge gathering.
Assam Chief Minister Tarun Gogoi, who was attending the session as a guest of honour said Assamese language and culture have been drawing applaud across the globe due to its outstanding identity.

In his address, outgoing president Kanaksen Deka said he was most successful chief of the Sahitya Sabha.