Assam draws lines on Communal Lines : War of words heats up between AASU and AMSU

In a press conference at Guwahati on Saturday, The AMSU Organising Secretary Ajijul Hussain Khondakar, chief organizing secretary of AAMSU had criticised the AASU Adviser, Sammujal Bhattacharya as a Congress stooge and also warned of a backlash against the Asomiya community in the minority dominated districts of Dhubri and Goalpara.

AASU central leaders as well as the Anchalik Units have come down strongly against these statements and they have issued strong warning to the AAMSU to abstain from such dangerous statements.

AGP and BJP have strongly criticised the AMSU statements. BJP wants the government to initiate criminal proceedings against the AMSU leaders. AGP President Brindaban Goswami in a statement wondered why the CM has not uttered a single word on the inflammatory statements made by the AMSU.

Various Organisations in the State have also come out strongly against the AMSU for their statements.

Meanwhile the AMSU in a damage control exercise has said that they had not said that they would drive out the Majority Population from the minority dominated areas but rather they were apprehensive that due to the recent steps taken by AASU and NESO, the minorities may feel aggrieved and they may retaliate.

Permalink Submitted by charlie on Tue, 31/07/2007 - 03:50
This is very serious statement given by AMSU Organising Secretary Ajijul Hussain Khondakar, chief organizing secretary of AAMSU and he also criticised the AASU Adviser, Sammujal Bhattacharya as a Congress stooge and he also told driven out Asomiya community in the minority dominated districts of Dhubri and Goalpara how dare he got that he will remove asomiya from those district dinth he donth know how powerfull asomiya people mr.ajiijul u must be a forener that why u told this things u canth remove asomiya from their own house motherland if u touch asomiya people u canth imagine what scquence will come and whole assam will burn and u also told AASU adiviser DR. sammujal congress sooge it make us laughing joke u donth know how he scarifice his life for student community and asomiya people for betterment for future so giving any statement think thrice and donth hurt asomiya people feelling and donth try to play politics in dirty way , the govt now should saw courage to arrest him on anti indian. 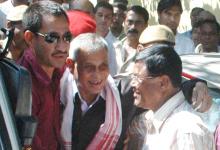 5 Dec 2010 - 3:54pm | editor
The process to hold talks between ULFA and the government seems to have reached a crucial point when the outfit's top leader Bhimakanta Buragohain was released on bail on Sunday. Buragohain,...

28 Sep 2016 - 11:43pm | AT Kokrajhar Bureau
Road communication was disrupted  for six hours from 6am in the district due to road blockade along 31C National Highway at Karigaon and Gurufela on Wednesday in Kokrajhar district, demanded...