Noted litterateur Rong Bong Terang has been elected the new president of Asom Sahitya Sabha on Sunday. The announcement to this effect was made by the state’s largest literary body came up at the Bhgawati Prasad Baruah Bhawan in Guwahati after the counting of votes sent by the district bodies ended. Kanak Chandra Sarma will be vice president while Dr Paramananda Rajbanshi has been elected as the secretary of the literary body. Terang is a litterateur whose epoch Rong Milir Hanhi sent him into the acme of glory. Contemporary social life in the state is very much there in his literary works . Jak Heruwa Pakhi is all about the ethnic frenzy between Karbis and the Kukis. The Assam agitation is what dominates his Krantikalor Oshru….During that time, he was attracted by the prose works of Hem Barooah’s Hagor Dekhisa not to speak of Banikanta Kakoti’s Sahitya Aaru Prem. Besides, he wrote a lot for Karbi language and literature. Mention may be made of Karbi Lamkuru, Karbi Kala Aaditag. Besides, some of his notable works in Assamese literature are Rong Milir Hanhi, Karbi Sahitya-Sanskritit Abhumuki, Nila Orchid, Smritir Papori and what not. It was Terang who for the first time used the word Karbi Anglong in his lyric.

Permalink Submitted by T DIPU SINGH on Sat, 09/05/2009 - 11:49
Rongbong Terang is a great writer and a well-known personality of Diphu, Karbi Anglong in Assam. His work is really appreciable and unique. Assam Sahitya Sabha will go a long way under his presidentship. We wish him all the good luck and prayers for future.

Permalink Submitted by abdul jalil on Wed, 08/07/2009 - 16:07
We are expecting that respected Teang sir,will shortly upload the photographs of all previous presidents and their presidential address in this site.

Permalink Submitted by rituraj boruah on Mon, 26/10/2009 - 14:36
Respected Sir, Myself as a magazine secy. of Assam Agricultural University, Jorhat needs a article from you.so please advice me how can I get your article. I will be remain grateful if you respond my request.

Permalink Submitted by Dr Ramani Barman on Mon, 09/11/2009 - 10:59
Asam Sahity Sabha since its inception selecting the person as its President who hiself is an institution. This time Rongbong Terang has been selected to Chair the glorious organisation of the people of Assam. Hope, he will be able to lead the present complex situation for better cause of Assam and the North East with selfless design.

Permalink Submitted by Tapan Kumar Bor... on Tue, 16/03/2010 - 19:50
"You are the best choice as the President of our respected Asom Sahitya Sabha. We hope that you can make our Assom peaceful And "Samannayar Shetu" between the pahar & Bhoyam. You make us (our Sahitya Sabha) proud to be an Assamese."

Permalink Submitted by Nayan Dutta on Sat, 15/05/2010 - 19:42
'sir i think that finally the eyes of assamese people open as they elect a person like you to save our assamese culture from sure destruction.'i wish a very good health of you. 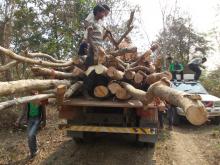