Haflong: An eerie silence prevails here on Tuesday even as Governor Lt General (Retired) Ajoy Kumar Singh and Chief Minister Tarun Gogoi are visiting the area to assess the law and order situation following the gruesome ambush on Monday that left Purnendu Langthasa and his close aide Nindu Langthasa to death.

According to information, both the Governor and the Chief Minister are scheduled to visit the residence of the Langthasas before talking to the district administration officials.

The streets here wear deserted look from early this morning and the loyalists of the Langthasa are gatecrashing the residence of Purnendu Langthasa, the Chief Executive Member of the North Cachar Hills Autonomous District Council to visit the bereaved family.

All business establishments and schools are remaining closed in the area and only police vehicles are plying on the streets as if it is a holiday.

Notably, the Chief Executive Member (CEM) and his associate Member in-charge of Education were shot dead by suspected Black Widow militants at Umrangshu on Monday at on their way to Longlei Hasnu village to attend a poll meeting. Two of their PSOs were also killed in the attack.

It is learnt that the militants had invited the member duo for a ‘dialogue’ at Longei Basti at 1.40 pm and spyared several rounds of bullets on them.

Purnendu is the eldest son of former Asom Cabinet minister and the Congress MLA Gobinda Chandra Langthasa. His second son was also killed by militants two years back.
Governor Lt Gen (Retd) Ajai Singh hunkered down with Chief Minister Tarun Gogoi on Monday evening and decided to deal with the situation firmly.

Both Mr Singh and Gogoi condemned the incident. Mr Gogoi termed the killing as an act of cowardice and said senseless killings would not solve any problem and instead it would compound the situation further.

Meanwhile, words of condemnation are puring in. The Dimasa Students’ Union (DSU) condemns the killing.

The students body demanded immediate removal of deputy commissioner Anil Kumar Baruah for his inability in tackling the situation. 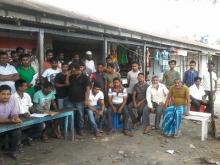 13 Jun 2012 - 11:25pm | editor
The Opposition AGP on Wednesday dared the government to take action on the Justice K N Saikia commission report on the alleged 'secret killings' which shook the state between 1998 and 2001....