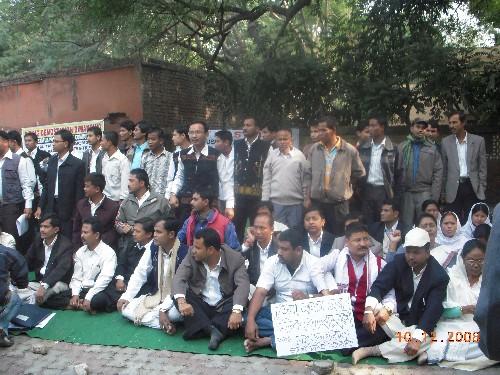 Six indigenous ethnic communities from Assam namely Chutiyas, Tai Ahom. Motok, Moran, Koch Rajbangshis and Tea Tribes have staged dharna at Jantar Mantar, coinciding the inaugural day of the Winter session of Parliament on December 9, 2009. They shouted slogans againat the apathy of the government in tabling the bill to grant ST status to these 6 communities.

18 Mar 2014 - 3:14pm | AT News
Thousands of people hit the streets in Tezpur on Tuesday alleging failure to arrest the Chauldhuwa culprits who mowed down 15 villagers in January end.With banners and festoons over one thousands of...

12 Mar 2009 - 3:59pm | editor
Two persons sustained injury as a truck was hitting a couple before entering a primary school in Dibrugarh town on Tuesday morning. That too minutes before the students were to come out for the mid...