19 Apr 2020 - 9:55pm | AT News
Patharkandi: An uneasy situation is prevailing in Pathorkandhi when a trader allegedly raped a minor girl on Friday. Identified as  Munna Kanu, the 51 old businessman was arrested under mounting... 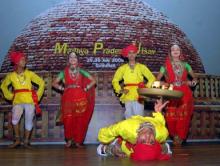 30 Jul 2008 - 3:59am | editor
Artists of Madhya Pradesh performing Badhai dance at the inaugural day of the Madhya Pradesah Utsabh 2008 organised at the Srimanata Shankardeb Kalakhetra, Guwahati on 29-07-08. PHOTO: UB PHOTOS.