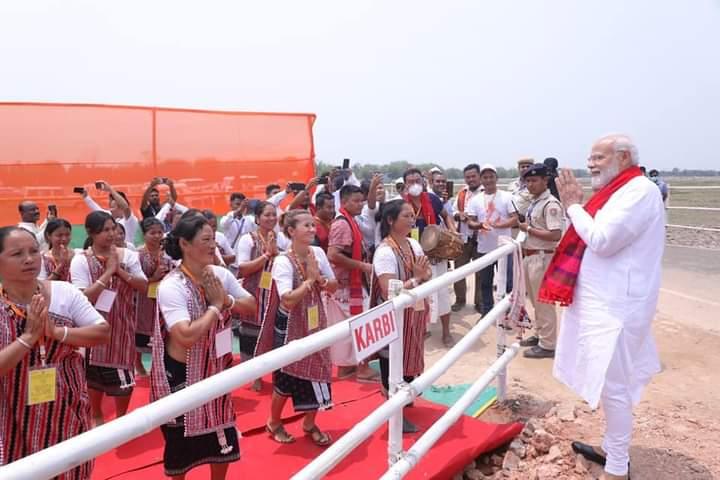 Prime Minister of India Narendra Modi addressed a ‘Peace, Unity and Development Rally at Longrithep, Diphu in Karbi Anglong Autonomous Teritorial Council (KAATC) on Thursday. During the programme, he was also the foundation stone of various projects. The Prime Minister virtually laid the foundation stone for Veterinary College in Diphhu, Degree College in West Karbi Anglong district and Agricultural College in Kolonga, West Karbi Anglong. Prime Minister Modi was given a rousing welcome at the Community Reception Centre of the program by more than 20 communities residing in Karbinanglong from Tai, Assamese Gorkhas, Manipuri, Bengali, Tea Tribes other than Karbis and Dimasas.

The Prime Minister said that the "double engine" government is working with the spirit of Sabka Saath Sabka Vikas, Sabka Vishwas and Sabka Prayas. He said the Karbi peace accord will usher peace unity and development in Karbinanglong.

The Prime Minister further appreciated Assam and other state governments in the region for implementing centre’s schemes with a sense of service and dedication. He praised Assam CM Himanta Biswa Sarma and Meghalaya  CM Conrad Sangma for settling interstate border disputes. The PM advised other state governments to follow the formula.  He also acknowledged sacrifices made by women for peaceful unity and development in the region and  coming out in such large numbers today  and reiterated his continued focus on the upliftment of status, ease of life and dignity of women in all measures of government. He further stated that Karbi Anglong is moving towards a new future of peace and development. “The culture of tribal society, its language, food, food, art, handicrafts, all these are the rich heritage of India. Assam is even more prosperous in this respect. This cultural heritage unites India, strengthens the spirit of Ek Bharat Shreshtha Bharat,” he said.

Speaking on AFSPA, he said that it was revoked from 23 districts of Assam, AFSPA’s ambit reduced to curb violence. “Our government removed AFSPA from Tripura and Meghalaya while the previous governments kept on extending it. We have also removed it from many districts of Assam,” he added. The PM also elaborated that due to restoration of peace leading to development and reduced security threats Government of India's decision to withdraw the Armed Forces Special Power Acer  (AFSPA) from various parts of Assam and Northeast. He is hopeful removing AFSPA from the region after evaluation.

2 Nov 2020 - 10:21am | AT News
Guwahati: Schools and colleges across the state are resuming classes on Monday 8 months after the nation wide lockdown to avert a worsening endemic.  The classes are resuming in two shifts in...