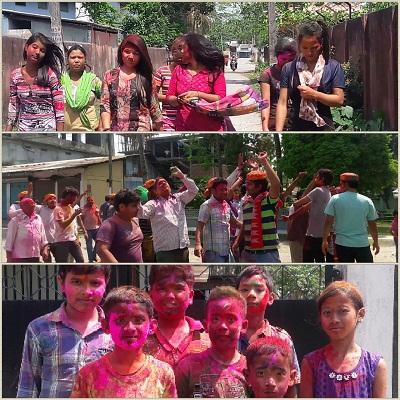 With the rest of the state Holi, the festival of colours, was celebrated with all the traditional mirth and religious fervour in the town on Wednesday and Thursday.

People cutting across age, caste, community and faith took part in the festivities that evoke a feeling of camaraderie and bonding. Citizens also visited temples and community prayer halls and sought the blessings of the Divine so that good prevails over evil. Community celebrations also marked the occasion.

Holi revellers were also seen descending on the roads and streets in their hordes and lending a carefree ambience to the celebrations. The more enthusiasts were seen honking horns and speeding past in bikes. Young children with their dresses smeared and drenched in Holi colours presented a lovely picture.

The colours of the festival generated an ambience of good will and people participated in different functions that were held on the occasion. The citizens celebrated Holi with great enthusiasm and gaiety and joined friends and family members in playing with colours.

11 Dec 2008 - 7:52pm | editor
Three Assam MPs namely Sarbananda Sonowal, Dr Arun Sarma and Rajen Gohain were asked by Lok Sabha Speaker Somnath Chaterjee to go out of the House on Thursday as they were sticking to the protest...