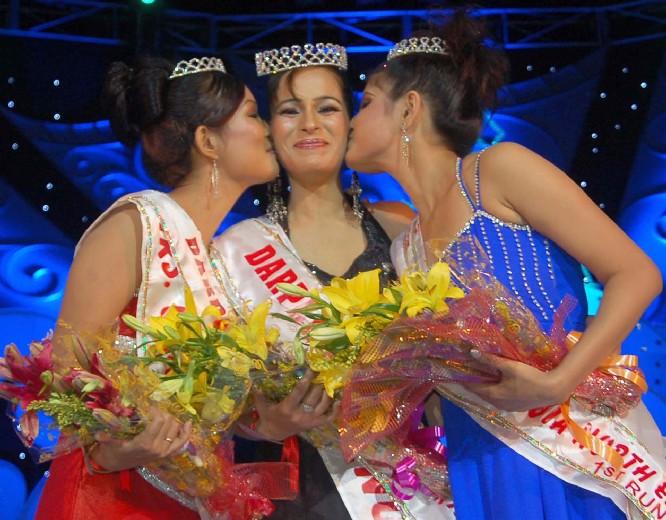 Guwahati based model and event organizer mother a daughter Meenu Paul of Assam was crowned the 3rd Darpan Mrs India North East title, the highly coveted beauty pageant for the married women in the Noth East, during a glittering function at the Pragjyotika ITA Centre auditorium for performing Arts on Saturday.The 1st runner-up title went to Ananya Auttri of Assam, while Temjennkro Jamir of Nagaland bagged the second runner-up title.

Organised by the Epitome Educational Society under the banner of Darpan, a chain of beauty training institutes of the State, the pageant has been held with the motive of giving a platform to showcase the talents and potentials of the married women of this part of the region.

The pageant was participated by around 50 women from across the region. However, only five women made the cut from the final round consisting of 16 finalists after a week long training.
Apart from the three top crown positions, BIG FM's two popular RJ duo RJ Mandy and RJ Hansie rocked the staged declaring 13 other subtitles titles including Mrs Translucent Skin, Mrs Captivating Eyes, Mrs Beautiful Smile, Mrs Lustrous Hair, Mrs Photogenic, etc., were also given away. Dance group Shadow proved a good break in midst of change of the models. Young singer Mayank enthralled the auditorium with his pleasant voice.

30 Oct 2017 - 12:52pm | AT Staff Reporter
Orang Balika ME School in Udalguri district was established in the year 1991 with public donation and support.The school was temporarily run in a house in the premises of Orang Lakhi Mandir.Education...