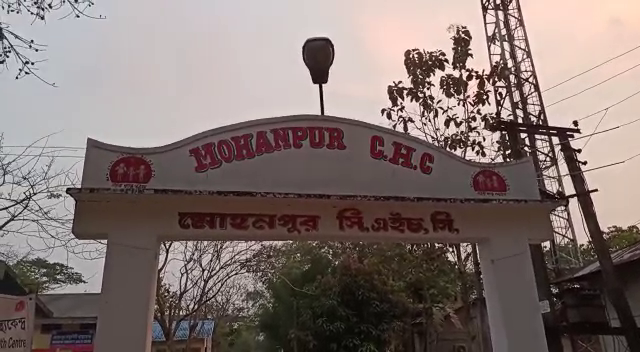 Hailakandi: Mohanpur Hospital Chattar on Monday became the scene of mass protests against the recurrence of such incidents at Mohanpur CHC Hospital and the negligence of the doctors and nurses of the hospital.

On Monday, Riazbin Sultana Mazharbhuiya was admitted to Mohanpur CHC due to labor pains. There was no doctor in the hospital, according to Riazbin's husband Lutfur Rahman Choudhury.The deceased gave birth to a son. The father of deceased child Lutfur Rahman Chowdhury alleged that the child died in the absence of the doctor.

Speaking to the father of the deceased child's father, lutfur Rahman informed Assam Times that there was no doctor available in the hospital when his wife was admitted.He urged the nurses and the CHC authority to refer her to the Silchar Medical College but the latter denied and provided confidence to him.Child being over weight, trouble arose during normal delivery, the nurses called Dr. Muktadir Alom, a specialist in gyno, who was not in duty, although he managed to deliver the child but dead.

Meanwhile, Mohanpur CHC in-charge Dr Hareshwar Das told the Assam Times that there was no doctor in the hospital.He added that he was in the town of Hailakandi.

AMSU vice-president Hailakandi Abdul Hannan complained that patients at Mohanpur CHC were deprived of access to healthcare. Besides, rampant corruption was prevalent in the hospital. Abdul Hannan Laskar further said that people were afraid to come to Mohanpur Hospital at night for emergency treatment.  People have doubts whether there will be a doctor in the hospital or not.The government, including the local people's representatives, is not seen to take any positive role in reviving the dilapidated health services of Mohanpur Hospital.  For this, various kinds of incidents are happening again and again.  Abdul Hannan Laskar said such behaviour cannot be tolerated in Mohanpur Hospital under any circumstances.

14 Oct 2011 - 1:14am | Ritupallab Saikia
The tension prevailing in the border town of Merapnai along Assam-Nagaland border at Golaghat has come to an end today when the Nagaland Government has finally withdrawn the Naga Armed Police camp...

3 Nov 2020 - 9:22am | AT News
Guwahati: A piece of paper that has gone viral in social media has touched off a seismic wave of anger and acrimony among the media fraternity.    The unsigned piece of paper has...

11 Oct 2017 - 10:53pm | AT Kokrajhar Bureau
The Bodo Writers' Academy (BWA), an organization of Bodo writers’ has been eyed introduction of Bodo language as medium of instruction in the Bodoland University (BU), which is the only university in...