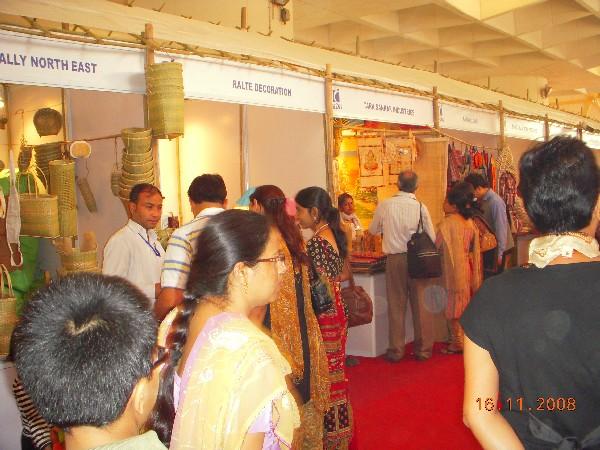 North Eastern Development Finance Corporation Ltd. (NEDFi) has participated with a contingent of 35 entrepreneurs at the 27th India International trade fair at Pragati Maidan. This is the 6th consecutive year that NEDFi has participated in IITF. It has 12 stalls from Assam, 3 from Manipur, 4 from Mizoram, 4 from Sikkim, 4 from Nagaland, 2 from Arunachal Pradesh, 2 from Meghalaya and 4 from Tripura. The pavilion is aptly named 'NEDFi Haat' in consonance with its permanent exhibition space at Guwahati. 13 new firms have participated this year.

NEDFi has brought in select handicraft and handloom items based on the local material and craft endowment of North East. There is a conscious effort to improve upon the design and quality keeping in tune with the taste of the buyers. The pavilion located prominently, at hall no. 6 is drawing huge crowd due to the appeal of its exotic and exquisite products. Pavilion has been designed with bamboo to give a distinct identity.

The eye catching items are bamboo and cane products from Mizoram, specially from Hnam Chantu Pawl, Aizawl , Handcrafted items and Lacardong Turmeric from Women's Group & Handicraft Multipurpose Co-operative Society Ltd., Jowai, Meghalaya, Kauna craft items from Organisation for Rural Improvement, Bishnupur, Stoles and Shawls from National Hill Women Welfare Association, Mechuka, West Siang, Sital Patti products from Suniti Sital Pati Industry, Bokajan, Karbi Along made by master craftsperson Mr. Bhakta Ranjan Mandal. The dry flowers from Nagaland are a craze with the women of Delhi. Muga and eri products from Assam have always been respected by the buyers for its durability and exclusivity.

NEDFi is a development finance corporation which has a wide range of products and services to cater from the micro entrepreneur to big companies. The corporation is also a partner in the Aggressive International Marketing Products for NER being implemented by a consortium of EPCH Export Promotion Council for Handicrafts (EPCH), Ministry of Development of North Eastern region (MDONER) and Development Commissioner for Handicrafts. This project infuses internationally accepted designs on North Eastern Region (NER) material. Thanks to this project, many of the former participants at IITF are now exporters.

The main problem with the North Eastern handicrafts produces is the lack of market. IITF brings them in direct contact with more than a million buyers. Exhibitors learn design and product pricing inputs directly from the end users. NEDFi's assistance in terms of traveling and other allowances and logistic support provides the requisite fillip to the entrepreneurs.

Uniqueness of NEDFi Haat is the representation of North East as a single brand. The stalls are mixed to give a heterogeneous display, characteristic of the diversity of North East, yet as a single identity. NEDFi has been receiving awards and accolades at IITF for its excellence in display. It received Gold Medals in 2003 and 2005, Bronze in 2006 and Special commendation award in 2007. It has to compete with PSU biggies, with its limited budget for these awards.

NEDFi had a very successful financial year in 2007-08. It had sanctioned Rs. 279.45 crores; disbursements stood at Rs. 116.44 crores and Profit before Tax was Rs. 24.34 crores. It has an equity base of Rs. 100 crores and just about 50 plus employees. This year a maiden dividend of 3% was declared to the shareholders.

30 Sep 2016 - 6:19pm | AT News
Dissidence seems to have started resurfacing in Asom Gana Parishad posing a serious threat to the Sarbananda Sonowal Government. Former Chief Minister Prafulla Kumar Mahanta and his lobby has been...