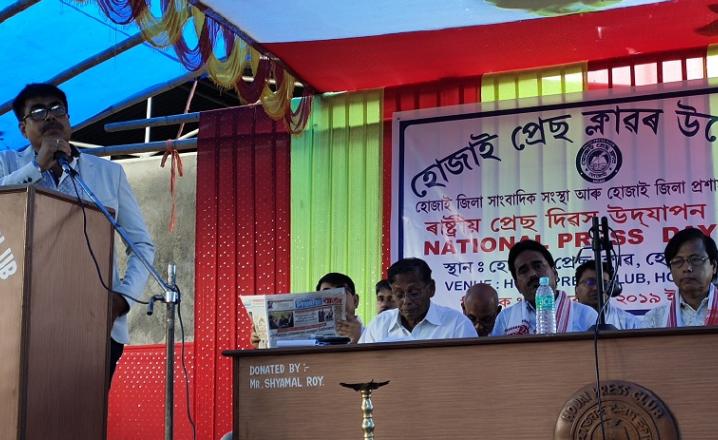 Speaking on the occasion, Chief Speaker Pradip Kumar Nath asserted Journalists covers the stories by working relentlessly day and night, they are with everyone whether their is sorrow or happiness,  but the safety and security of Journalists is in big question?

He said Government should take necessary actions to provide safety and security to the Journalist fraternity.

He further  said "Journalism is the weapon which should be  used for the betterment of society, it is the  duty  of Journalists to highlight the stories which really needs attention."

"Journalists should indulge themselves in continuous process of learning to enhance their knowledge.", Nath added.

DC said  Workings of Journalist touches each section of Society, so they should work keeping mind each aspect of the society.

He further stated the three mantra of positive journalism is transparency, honesty and fearlessness.

He said Good relation is the key to find the hidden stories, Journalists should try to set up a good network so that stories directly come to them instead of finding.

All other guests spoke on this occasion and stressed on significance of  positive jounalism for the over all societal welfare.

One minute silence was also kept in the meet to pay tribute for Journalists who were killed while performing their duties.Saplings  were aslo distributed among the guests.

People from all walks of life attended the meeting. The anchoring was done by Dr. Pijush Nandi.

20 May 2015 - 7:37am | AT News
Guwahati: Journalists’ Forum Assam (JFA) has expressed serious concern over the killing of three bloggers in Bangladesh this year and urged the Sheikh Hasina government in Dhaka to probe into the...

17 Jul 2015 - 7:57am | AT News
A full scale coming operation is going on in Tinsukia and its adjoining areas against ULFA after it threatened the Hindi-speaking people of dire consequences.Police and para military forces are...