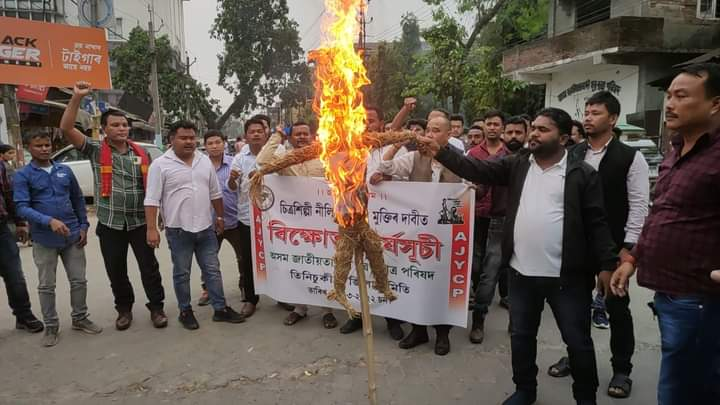 Surojit Moran was the joint secretary of AJYCP Central committee. Hunmoni Chaliha was the president. Kanchan Borah was the General Secretary of AJYCP Tinsukia district committee. They were all present during the burning effigy and shouted various slogans against Chief minister Prema Khandu and BJP led Government of Arunachal Pradesh.

Kanchan Borah mentioned that Nilim Mahanta is a renowned graffiti artist of Assam. He painted several paintings, but on Sunday he was arrested from his residence by Arunachal Pradesh police because he painted "No Big Dams" on the walls of Arunachal Pradesh.

CBI to probe only 7 BTAD cases

10 Aug 2012 - 3:55pm | editor
CBI is preparing to probe only 7 cases instead of 309 cases handed over by Dispur. The CBI team led by S Ali decided to register 7 cases after consultation with chief minister, DGP and chief...

28 Jul 2008 - 4:02am | editor
The overall flood situation in Assam continues to remain critical on Sunday as some more areas are reeling under the flood waters of the river Brahmaputra and its tributaries rendering as many as...