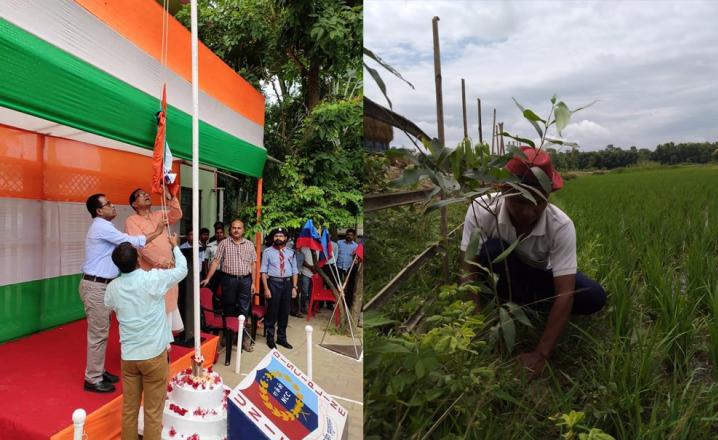 On  the auspious day of Independence day  a Youth  Deb Kumar Barman, resident of komrakata took the sole initiative to plant saplings. He planted around 45 saplings at  Komrakata Pathar road in Hojai on Thursday.

Talking to this Correspondent, Barman said," 3.5 km area of this road doesn't have any tree, so since many days he was planning to do something, so  today, he took this initiative to plant saplings."

He said hope others will come up to support this noble cause in coming  days for the environment.

Cultural events were also organised where students from different schools,colleges and NGO's performed. District Administration along with District Industries and Commerce centre also felicitated Businessmen Rohit Agarwalla of Lanka town with 'Successful Entrepreneurs award'. Also, Hojai's Ajmal Foundation was presented with 'Best NGO Award' for their enormous contribution in the upliftment of society.

Rashtrabhasha High School, Hojai Bar Association and almost all the school, Colleges, government office's and social organisation of the district celebrated this day with much enthusiasm.

7 Dec 2017 - 9:20pm | AT News Imphal
Demanding disclosure of the details of ‘Framework Agreement,’ residents in Thangmeiband constituency on Thursday observed a day off from work. As part of the day-long protest, a sit-...

27 Mar 2014 - 4:00pm | AT News
The Gauhati High Court on Wednesday will hear Akhil Gogoi’s bail petitions moved two days back.The court took up these petitions on Thursday moved by his counsel. But could not proceed due to non...