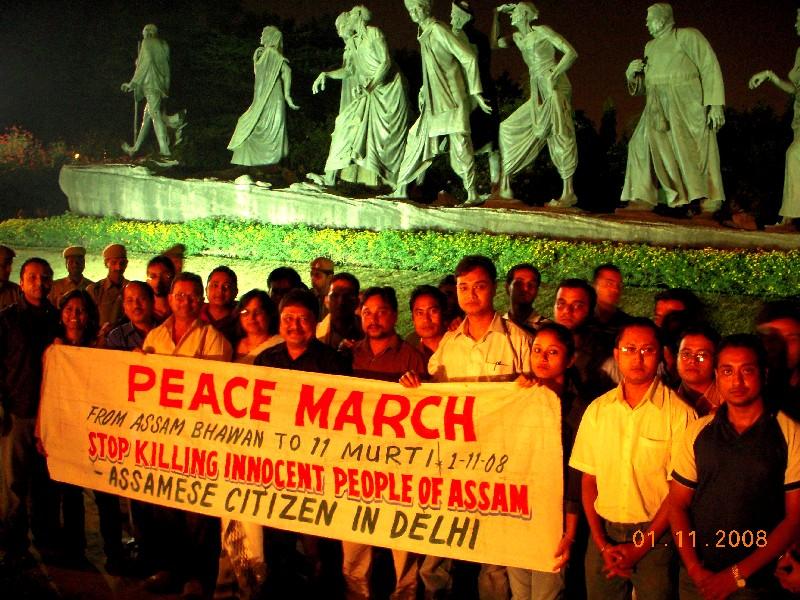 Assamese citizens of Delhi participated in a peace rally from Assam Bhawan to 'eleven statues'- (the famous statue of Gandhiji with 10 select followers) located at Sardar Patel Marg, Chanakyapuri. About 400 students, youths and people from different walks of life took part in the rally shouting slogans that condemned the the terrorists and demanded safety for the common people. The air was ranted with slogans of 'Terrorism- down, down", "We want peace", "Terrorists-Hang them", "This country is ours" etc.

The Assamese citizens of Delhi are concerned at the lawlessness and helplessness of the state machinery in tackling terrorist attacks. This was the worst attack in the history of Assam, and one of the major ones in Indian terrorism history. The scale at which the strike was made and the impunity with which they ran the operation, has shaken the confidence of the ordinary citizens. The objective of the terrorists was fulfilled- they succeeded in shaking the people from inside.

There was another rally organized by Assamese students at Delhi University campus today. Few more such rallies are being organized at Jantar Mantar, India Gate by common people.

It is heartening to see that common people have woken up to protest against such dastardly acts, where the victim is the common man, the innocent who was going to a shop, walking to a bank or was just going about his usual business.

Permalink Submitted by Raktim Ranjan Saikia on Sun, 02/11/2008 - 09:11
Its a shameful act.. why these people have to kill the innocent. People of Assam will never going to forget this and will continue to live in fear.. Assam is not a HAPPY N PEACEFUL STATE ANYMORE.. we have to act.. is the government listening to the voice of agony of the people. Who ever did it never going to be happy and be successful in there work. Violence is never going to win...

Permalink Submitted by Shudipta Baruah on Sun, 02/11/2008 - 09:12
Assamese people have been brutally assaulted by these terrorists day in and day out. We need to sweep them off.......

Permalink Submitted by Jayanta Madhav Barua on Mon, 03/11/2008 - 13:13
It is high time for all of us (irrespective of cast and community ) in India rise to the occasion and help the intelligence agencies to nab those culprits and ensure proper punishments to those who deserves . It is really a shameful act and a big dent for Assam in every respect .May I request those so called Patriots from ULFA to open up their eyes now ? ? 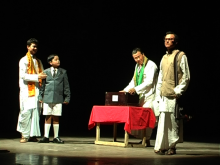