IMPHAL: Adequate security measures have been put in place in view of the Manipur visit by Vice President M Venkaiah Naidu tomorrow.

Naidu will arrive in Imphal at 1:30 pm. He will attend the closing event of a state level workshop on “Biodiversity and Sustainable Agriculture for Doubling Farmers’ Income” at City Convention, Palace Compound, said official sources.

Manipur Governor Dr Najama Heptulla and Chief Minister N Biren Singh will attend the closing function of the workshop organised by the state government in collaboration with the Central Agricultural University.

Agriculture minister V Hangkhalien will formally inaugurate the workshop which will have two technical sessions—11 am to 1 pm and 2 pm to 3:30 pm. I 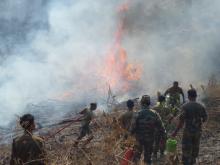