Security forces are fanning the areas across Assam-Arunachal pradesh border in Dhemaji district a few hours after NDFB kidnapped a top ranked railway officer on Saturday. According to information, railway construction form BAPL's project manager Anchal Modi was whisked away at gun point by a group of miscreants from Simenchapori in Dhemaji district who are suspected to be the cadres of NDFB's Ranjan Daimary faction at around 12 noon on Saturday.

In yet another incident the Bodo rebel group kidnapped an irrigation SDO Nur Ahmed from Tangla in Darrang district on Saturday. Ahmed was kidnapped from Kawadanga area. Details are awaited.

6 Aug 2014 - 8:18pm | Hantigiri Narzary
An identification camp for persons with disability was organized in association with National Institute for the Orthopedically Handicapped (NIOH), Kolkata at NTPC Bongaigaon Hospital,...

17 Feb 2015 - 6:11pm | Hantigiri Narzary
The body of a neonate sends no less shock in Kokrahar town on Tuesday. Local residents in the town spotted the body behind the fly over in the morning.Eyewitnesses told Assam Times that the body was... 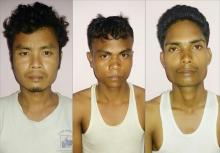