Once again Kokrajhar hits headlines for wrong and shocking reasons. The BTAD district has registered the highest death of children in the state.

The uncomfortable disclosure came to light when DAVP was organizing an awareness programme of Mission Indradhanush in Kokrajhar on Monday.

The speakers blamed lack of awareness and facilities from health department which was why, all children in the riot hit BTAD areas did get the benefit of the mission.

They further said that the awareness is required in the remote areas of the district where the mission has been failing to percolate any benefit.

The organizers also took out a rally from Chitila Community Hall through the Chitila Tinali, to be participated by a large number of Asha workers.

17 Aug 2011 - 10:45pm | Juthika Das
Sarthebari is famous for its age old Bell- Metal industry. Sarthebari was upgraded as the township in the year 1955. But it is a matter of great regret that in spite of being a town, still the road... 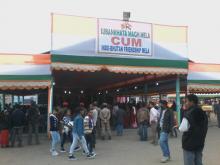