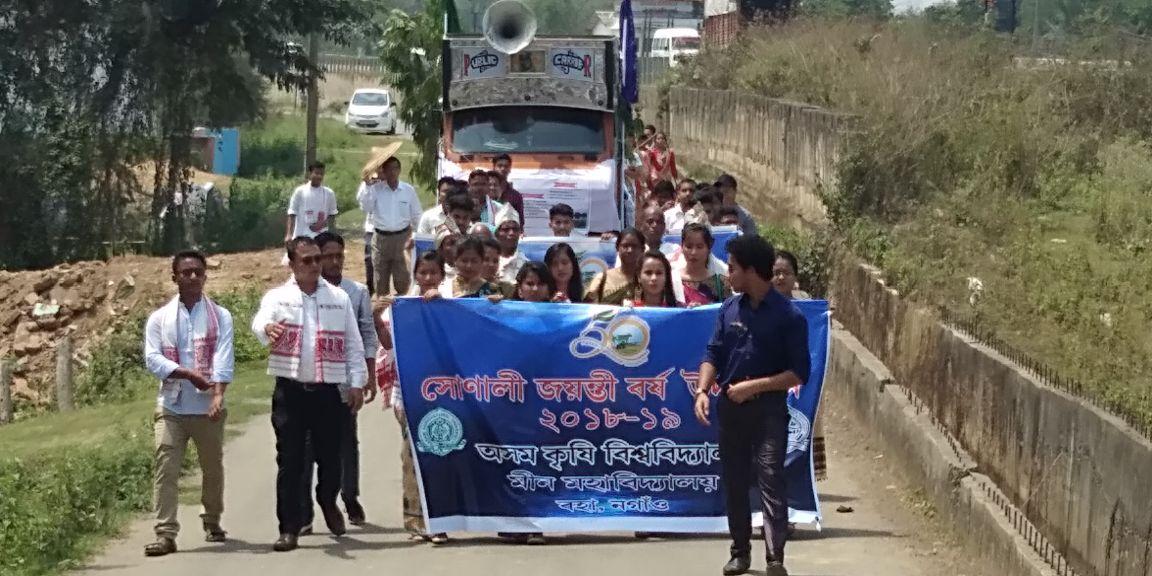 Esatablished on 1st April in the year 1969 , Assam  Agricultural University , Jorhat ,  is the first institution of its kind in the whole of North-Eastern region of  India. The main goal of the establishment of this  institution is to produce globally competitive human resources in farm sector and to carry out research in both conventional and frontier areas for production optimization as well as to disseminate the generated technologies as public good for benefitting the food growers  and traders involved in the sector while emphasizing on sustainability , equity and overall food security at household level. Since its inception in the year 1969 , the University has produced about 18,000 graduates and post graduates till date. These human resources are rendering yeoman’s service to the state , regional , national and global agriculture in various capacities.
Before establishment of Assam Agricultural University , there were altogether 17 research schemes / projects in the state under the department of Agriculture , By July 1973 , all the research projects and 10 experimental farms were transferred by the government of Assam to the AAU which already inherited the College  of Agriculture and its farm at Barbheta , Jorhat and College of Veterinary Sciences at Khanapara , Guwahati. Subsequently , College of Home Science at  Jorhat ( 1969 ) , College of Fisheries at Raha ( 1988 ) , Biswanath College of Agriculture at Biswanath Chariali ( 1988 ) and Lakhimpur college of Veterinary Science at Joyhing , North Lakhimpur ( 1988 ) were established. At present , the university has three more colleges under its jurisdiction , i.e. , Sarat Chandra Singha College of Agriculture , Chapar , College of Horticulture , Nalbari  and College of Sericulture , Titabar. The university has comprehensively succeded to carry out agricultural research , teaching and extension in the last 50 glorious years of existence. The university is also striving to serve the farming community of the state through its network of 23 Krishi Vigyan Kendras ( KVKs ) distributed all over the state.
It is worth mentioning here that  AAU Vice Chancellor Dr. K.M. Bujarbaruah received “ Sardar Patel Outstanding Institution Award , 2014” by Indian Council of Agricultural Research ( ICAR ) , New Delhi for its outstanding performance in all spheres of teaching , research , extension , and innovations consecutively for 5 years since 2009 to 2014. He was also awarded the Best  Vice Chancellor Award among all the Agricultural Universities of India , All India Agricultural Students Association , ICAR and University of Agricultural Sciences , Raichur in the year 2017. KVK , Sonitpur of AAU has also recently been coferred the Best Zonal KVK award on 17 th March , 2018 by the Prime Minister Narendra Modi  in New Delhi.
The Assam Agricultural University  is celebrating its golden jubilee year with a year long celebration programme commencing from 1st April this year.  As a part of this celebration ,  College of Fisheries , a constituent college of the university today took out a colourful cultural procession at Raha. More than 100 students , teaching and non-teaching staffs of the college headed by Dr. K. K  Tamuli , Dean , College of Fisheries , Raha participated in the procession where the achievements of the university in the last 50 years was highlighted. In the cultural procession, bihu husori, biya naam, ai naam, jikir and jari, Assamese marriage, gayan-bayan, folk dances of various tribes of Assam and North-East were demonstrated which enthralled the audience.

16 Jul 2012 - 2:58am | editor
Dispur is waiting for a huge Central fund to dress the Kaziranga National Park afresh after it was ravaged in the time of flood. Chief Minister Tarun Gogoi said on Sunday disclosed it after he made...

24 Aug 2015 - 6:25am | AT News
Pradan Baruah put in his papers as parliamentary secretary hours after Dr Himanta Biswa Sarma unofficially joined BJP on Sunday.According to sources, Baruah along with 5 others will follow Dr Sarma...