NAMRUP: More than two dozen contractual workers engaged in the Namrup Thermal Power Station are on fast unto death from Monday raising a slew of their demands partially affecting the functionings of the power generation operation.  With festoons and play cards the contractual employees started staging the hunger strike from Monday morning in front of the General Manager’s office demanding immediate settlement of their appointment issue.

“ With this hunger strike we demand steps to ensure appointment on permanent basis. Otherwise, we would keep striking,” said Babul Chandra Das, president of  Fixed Pay Contractual Labour Union said. He said,” on June 9, 2017 in a tripartite meeting, the authorities promised to meet our demand within 6 months. But the General Manager (Generation) has gone back to his promise,” said Das.

28 Jul 2013 - 9:06pm | AT News
Guwahati slips into a reign of terror amid fear of ULFA attacks when a powerful bomb explosion rattled the city on Sunday evening leaving atleast 8 people injured. The explosion took place in...

11 Mar 2014 - 2:39pm | AT News
In a significant development, the Opposition parties are considering a consensus candidate in Koliabor to stymie the poll prospect of Congress candidate Gaurav Gogoi in the upcoming Lok Sabha polls.... 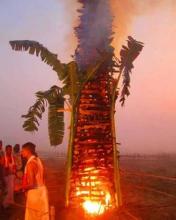 14 Jan 2018 - 5:52am | AT News
GUWAHATI: Joy of Magh bihu grips millions if people in the nook and corner of the state as the annual harvest festival takes place on Sunday with offering puja to the firegod. Defying a biting cold...