Namrup: One person was charred to death when the house in which he was staying caught fire in Namrup on Saturday.

The incident took place in Vasubari area in the evening when the person who was known to be a mentally challenged was inside the house as the local residents came to see some smokes bellowing from the house. Neighbours in large number tried to extinguish the fire. But by then the person inside it was burnt alive. The origin of the fire is not known. 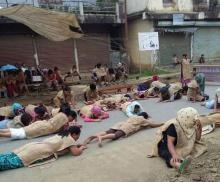 Give Ranjan we will give you peace: NDFB

5 Nov 2011 - 1:54pm | editor
NDFB on Friday makes it clear that the peace initiative with the government won’t proceed unless and until chairman Ranjan Daimary is released immediately. Addressing a press conference...