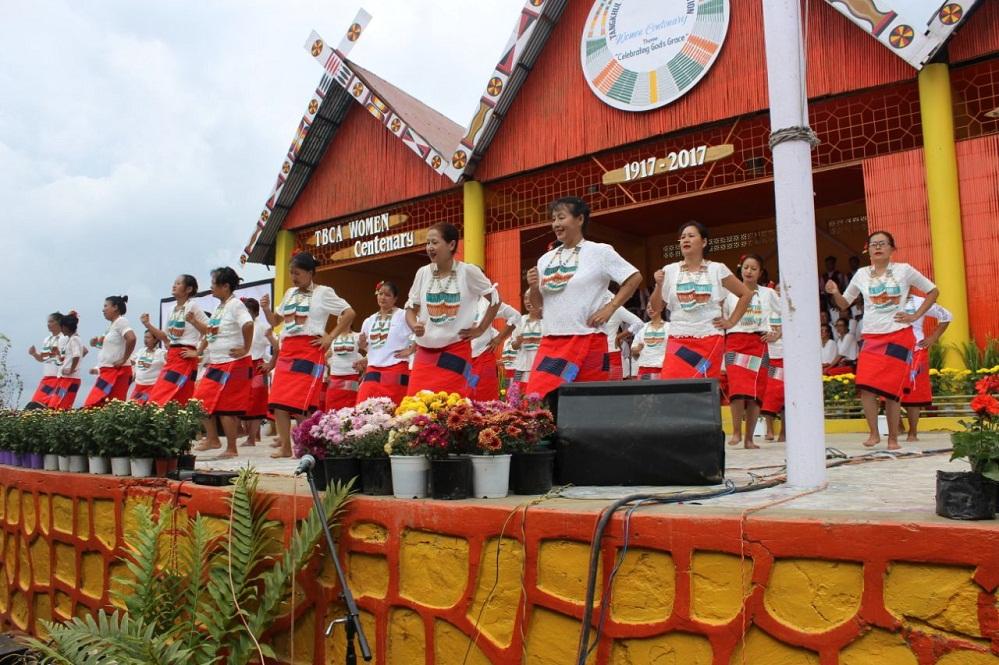 In conditions where prolonged monsoon had extended way far into fall this year, there seemed little to do to stop the inclement weather. God's grace could still overpower the element in the most amazing of ways.

Showery experiences had thrown a trepidation among many during the preparations ahead of the four day-long Women Centenary celebration of the Tangkhul Baptist Churches Association (TBCA) Women Union. Despite this, amazingly not a bit of precipitation showed up as a graceful array of praise, worship and music and talent brought a bone dry curtain on the centennial celebration here at Phungyo Mission Ground, Awontang on Sunday three days after getting off to a sky clear start on Friday last.

The centennial celebration which was organized by TBCA Women Union and hosted by Phungyo Baptist Church under the theme 'Celebrating God's Grace' drew a total of around 5000 strong congregation, including both local members and 2300 delegates drawn from 88 different Churches across the district and outside.

Marking the end of the grand celebration, Pakahao Makan, former women secretary TBL, on Sunday evening ceremoniously dehoisted the Women Union's flag in the presence of the women union executives before the mammoth congregation.

On the closing day, Rev Wungnaoting Konghar, general secretary MBC, brought the good messages on the topic 'Living In The Fear Of The Lord', stressing on the need for every believer to sustain a sincere relationship with the Almighty.

Apart from prayer and worship programmes celebrating and glorifying God for His unfailing grace for the Tangkhul woman folks over the past 100 years, a colorful assortment of foot tapping choreography performances, music, narrative skits, talent displays by different federating women units added spiritual fervour to the celebration.

23 Feb 2014 - 3:08pm | AT News
Chief Minister Tarun Gogoi gave away Madhabdev Award to Mrinal Miri at a function in Narayanpur district on Sunday.In his address, Gogoi said that his government would do everything possible to...

Tezpur gears up for polls

6 Apr 2014 - 2:40pm | AT News
A massive security arrangement is in place in Tezpur which goes to the Lok Sabha polls in the first phase on Monday.The voting will take from 7 in the morning at 1,763 booths to decide on the fate of...