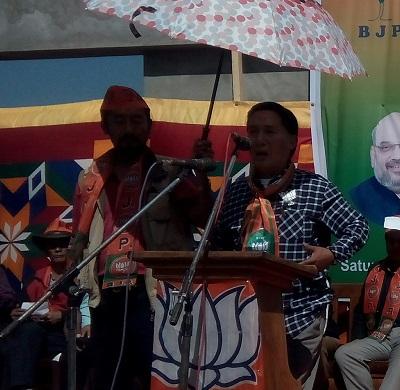 Calling Bharatiya Janata Party (BJP) the 'right political platform', former government bureaucrat and 45-Chingai BJP candidate Sword Vashum has stated that he has found the jumping off point for realizing the common aspirations of the Nagas in the party.

Stagnation of development in all aspects of people's lives has continued for years in the district and this is a matter of grave urgency for the people to collectively address the issue, Vashum told a gathering that numbered over 2000 during the grand official launching of his campaign at Zimik Centre Plaza, Viewland on Saturday.

Without taking the name of any political parties, he stated that the outcome of a national political party ruling for over six decades at the Centre and for consecutive 15 years in Manipur has been full of regrets for the common masses.

In Manipur, life of the common people in the hills, being plunged into endless struggles in the face of privation of all basic infrastructures like road communications, medical, education etc. has continued under the regime, Vashum said and added that to bring about a far reaching impact of positive change in the way people live is a clear intent of BJP party under the leadership of prime minister Narendra Modi.

Calling upon the people from all strata of the society to participate in the change process, Vashum assured that the fruits of the initiative would be for all and not just for the party workers and supporters.

He said that it is a crucial time for the people of Chingai constituency to exercise their wisdom, adding that the right decision could only salvage their future. Along with Sword Vashum, Kashung wished all the BJP candidates from the three constituencies of the district a victory in the forthcoming second phase elections.

Joining the kickoff, Social activist from Jammu & Kashmir Hakuqat Jamwal, who has been known to Vashum on friendly terms for years, said that Nagas, especially Tangkhuls are a people living in hard struggle for their survival. "Here in Ukhrul district, I have seen how the dismal state of many basic facilities, like roads, medical and others is making the lives of the people hard," Jamon observed.

Talking to media persons after the kick off ceremony, Vashum expressed gratitude to all the people who attended the event from far and near, displaying elation at the mammoth public turn up.

Keeping focus on securing a future of dignity for the posterity, he stressed that it is imperative for the people at the grassroots to respond to the call of inner conscience in exercising their franchise.

"Sword Vashum is born to a pastor and is a godfearing man. I know he won't betray his people so I support him," said Shimthar Shimray an elder from Ngaingu village on the sideline of the function.

Another participant from Chingjui Khullen village K. Dominic said that he find Vashum to be the most eligible of all the candidates around and confided that if elected Vashum will surely fulfill the wish of the Nagas. 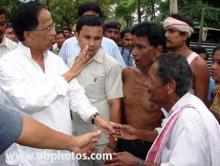 No let-up in Lakhimpur monsoon agony; CM greeted with wrath

18 Jun 2008 - 1:15pm | editor
There is no let-up the overall flood scenario in north Assam district of North Lakhimpur even as Chief Minister Tarun Gogoi has admitted virtually his government's inability to tackle the problem....

5 Jan 2016 - 11:18pm | Ashoke Kumar Das
Sankarghola is a village under the North Salmara sub-division of Bongaigaon district of Assam. It is located in the foothills of Bhairabsura hill under Bhairabsura reserve forest. The nearby forest...

24 Mar 2014 - 10:13pm | AT News
Congress high command has directed party leaders in Assam to ensure massive victory in the upcoming Lok Sabha polls.AICC vice president on Monday was believed to have got tougher with the dissident...