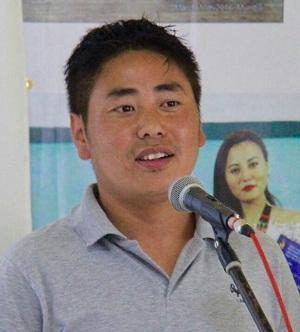 Of late, there has been a good deal of talk in the Tangkhul film community as well as in social media about the ongoing shooting of the second feature film by the Meiphung Production, post box office success of its debut 'Kha Yurna Mataimei.' Well, 'Thotkha Mirin Khani' is the next film that is creating a wave of excitement already. Hopefully, the title itself is equally intriguing, isn't it? Loosely translated, it means 'two lives in one generation.' So the guesswork is what are the two lives and how that will be portrayed as a possibility. And convincingly at that!

Come to think of it if the plot is based on real life situations and much of the essence of 'Thotkha Mirin Khani' --a family drama of sort -- captures the realities of contemporary Tangkhul society. In a candid conversation, CEO, Meiphung Production Aning Ruivah and Director of the film Riyo Varam share their experiences in making of their latest venture and what their expectations are.

"Our latest film is basically a family drama that attempts to depict an emerging gulf between well do to families and impoverished ones," said CEO Ruivah adding that this a sad scenario that is creeping into the contemporary Tangkhul society, consciously or unconsciously.

"By depicting this, we want our society to realize the defects of relying heavily on a yardstick that only divides the rich and the poor on an artificial line of materialistic possessions."

On the critically chosen title, director Varam said that it denotes the opportunity that mankind get to live
diametrically opposing lives in a single lifetime, whereby they transform their life from rags to riches and vice versa. Relating it with the storyline, he continued that: "We seize on the message of nothing, not even riches or privation, is permanent in this world."

Throwing light on the strength of the new film, Varam said that it will be relatively a more sophisticated one with more leading characters, crew members and with a bigger budget engaging state of the art technology.

"This time around we look forward to premiere the film in more cities including Chennai and Pune and accordingly, we expect higher viewership and fans ," he disclosed adding that the film is being projected for release before the Christmas.

To a question if their artists are formally trained, he answered in the negative and added that: "Considering this, they are quick enough to learn how to shoulder their respective roles without major directorial assistance."

At the same time, CEO Ruivah reiterated that Meiphung Production is not solely concentrating on filmmaking. "We are a team founded on spiritual perspective to work for the good of the community, including job generation, mobilizing youth, preserving natural resources for better future."

"And while we often figure out how to promote tourism, we focus on our beautiful places like Layi hill, scenic forests of Peh, Somdal villages and others within Ukhrul district for locations of film shooting, before we zoom off to Imphal and Delhi," Aning added.

6 Feb 2014 - 4:30pm | AT News
In a bizarre incident, the Army jawans stabbed two passengers inside a train as they protested against defence personnel occupying all seats at the Rangia railway station on Thursday. GRP officials...