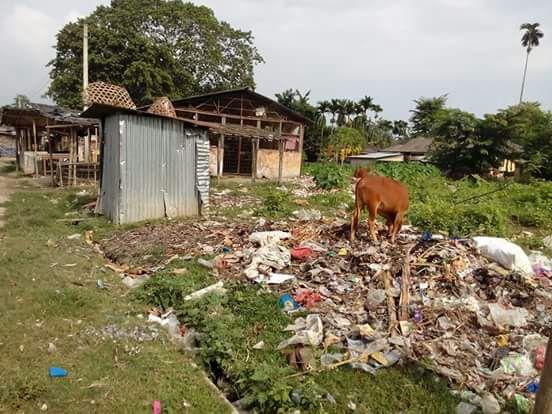 A filthy surrounding in and around the  BVFCL Fertilizer unit has raised serious doubts over the sincerity of the authority to keep the area clean.

BVFCL Fertilizer, the single unit in India which runs on Natural Gas and has its  own Marketing Complex (BVFCL Daily Bazaar) with 30 permanent shops. But cleanliness is nowhere seen with foul odours of vegetables, Meat and Fish shops making it difficult for the people stay calm.

Lack of proper drainage system is to be blamed for it where the residents of the  Sec - C area have been bearing the brunt.

Smrity Rekha Kalita. President and Samiron Boruah, Secretary of Human Rights and Anticorruption Forum Namrup, said " a recent  survey has revealed the real picture  which is responsible for air pollution in the entire area.”

The duo said that BVFCL authority   neither has installed a dustbin in the area to dump the garbage in the three huge industrial areas to save the people from 41 villages and 8 tea gardens. Will the BVFCL authority act?

1 Mar 2008 - 3:50pm | editor
There is crack at the historic Rangghar even as the local people have attributed to the on going seismic survey in and around the monument built by the Ahom Swargadeo Pramatta Singha. The has...

Blast at Guwahati, 1 killed and 10 injured

31 May 2019 - 10:33am | AT News
Guwahati: One of the oldest nursing homes of Assam, Barthakur Clinic will conduct the next media OPD clinic at Guwahati Press Club on 1 June 2019 for the benefit of its member-journalists. The...