Yet another incident of bizarre domestic violence a husband allegedly set his wife on fire in Nagaon district of Assam sending shockwave across the state.

Identified as Rana Bordoloi is alleged to have killed his wife  Sabitri by setting her on fire at their home in Palengtoli,Barkola  in the afternoon.

Local residents who refused to be named told Assam Times said because of domestic violence, Rana poured kerosene on his wife and threw fire at her and the fire charred her on the spot. Then Rana has gone missing.

Local residents informed the Bebejia police who is looking for Rana registering a case against him.

11 Mar 2014 - 10:00am | AT News
Dispur police have registered a case against Chief Minister Tarun Gogoi and revenue minister Prithivi Majhi on the basis of the complaint lodged by Purnima Bora whose husband died after self... 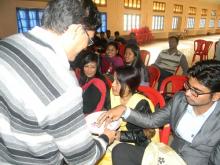 22 Feb 2015 - 5:53pm | Jayanta Kr Sarma
A four days capacity building training programme on integrated science learning for the teachers of Dima-Hasao district of Assam started at Haflong on Feb 21, 2015. This was organized by Vigyan...