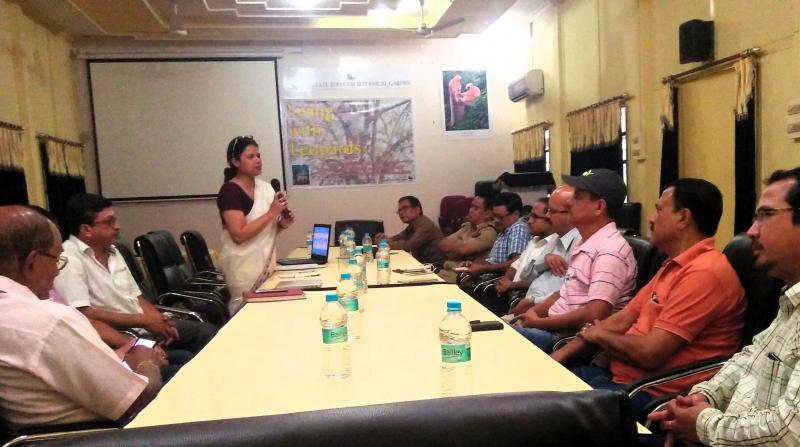 Assam has seen a spurt in human-leopard conflicts since the 90s.In the last few years the conflict has taken a turn for the worse with a number of the species killed by mobs.Although a government guide that explores all means of reducing conflicts is in place,leopards continue to be exterminated following attacks each year. “A census of the leopard is needed to be undertaken in the state to ascertain its present status,” said Mohan Chandra Malakar,retired PCCF (Wildlife),state forest department and asked for strict guidelines on the issue.“Wildlife protection should not be solely the responsibility of the wildlife division of the department, the territorial division shares equal responsibility within its jurisdiction,”he said. Mr. Malakar was speaking on the issue of human-leopard conflict in a meeting that kicks-off an initiative “Living with Leopards” at the Assam State Zoo premises recently in a programme through education and outreach on man-animal co-existence in the urban landscape of Guwahati."Our objective is to build capacity for addressing the problem and to follow a policy of co-existence by ensuring safety of humans and survival of the species for which we invite the civil and police administration to support this initiative",said Mubina Akhtar,journalist and conservationist.“With the "prey biomass" (smaller animals) of leopards decreasing mainly due to habitat destruction, the leopard has developed a tendency to prey on domestic cattle and other livestock.This has, led to reduction in the tolerance levels of people towards this animal leading to killing of leopards.The intolerance level of the masses forced many of the animals to land in captivity. We firmly believe,trans-location is simply not the ultimate solution to this crisis.Proper education among the masses with intense awareness campaigns for protection of the species is the key for a sustainable policy of co-existence among other long-term measures”, she added.Opening the discussion,Anupam Sarmah from WWF-India said that while there are rapid response units in wildlife divisions, their functioning has been marred by manpower and logistics constraints. On the other hand, the response system needs to be upgraded and better-equipped to deal with the growing incidence of straying wildlife. The “Living with Leopards” initiative in the Kamrup district supported by WWF-India will work on outreach and education towards reducing the crisis.“The human-leopard conflict has assumed alarming proportion in the recent years in the city of Guwahati, it is very important to identify key leopard habitats and the forest department should immediately demarcate those areas, said Moloy Barua, president of Early Birds.The meeting that was attended by the DFO,Guwahati Wildlife division Pradipta Baruah, DFO Assam State Zoo Tejas Mariswamy, ACF A K Choudhury, Range Officers Mukul Tamuly, Diganta Das and Hemanta Talukdar among others, researchers and members of civil society groups discussed at length the initiatives to be undertaken through this programme after sharing knowledge on conflicts and conservation efforts, policies, and potential collaborative solutions.City Police ACP Bidyut Das Boro urged for the coordination of this project with citizen committees under each police station of the vulnerable areas for better results.


Sharing his experiences, veterinarian and FRO, Assam State Zoo, Dr Bijoy Gogoi stressed on compilation of some “do”s and “don’t” for the masses during such incidents.Wildlife activist Jayanta Kumar Das,Mridul Bora and journalist Chandan Kumar Duarah stressed on the need for round-the clock rescue units for such incidents; toll-free numbers for help with forest; and coordination of police and civil administration during wildlife rescue operations.

9 Feb 2014 - 9:54am | AT News
A tea garden manager was rescued in Jorhat district on Sunday 24 hours after he was kidnapped by a group of miscreants from Titabor.Identified as Moon Mahanta, the Lakhimijan Tea Estate manager...

13 Sep 2015 - 7:00am | AT News
Properties worth one crore were reduced to ashes when at least ten shops caught fire in Goalpara district on Saturday.The incident took place at Balapara area where the fire originated at a shop and...