4 Apr 2014 - 8:33pm | SK Hasan
A sigh of relief for the Jorhat poll candidates. The tea garden voters in Charaideo, Dholbagan and Lengibor in Nazira assembly segment will participate in the polling slated for April 7.Earlier, the...

27 Sep 2008 - 10:18pm | Nava Thakuria
Floral tributes were paid by the members of Guwahati Press Club to Pankaj Sharma, an upcoming photo journalist of 'Dainik Batori Kakot', an Assamese Daily from Guwahati, who died of Jaundice in a... 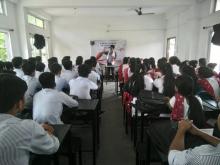 8 Jun 2019 - 6:37pm | AT News
Tezpur: A free career counselling programme was organized by the initiative of 'SAHYOG' -the social welfare club of Girijananda Chowdhury Institute of Management and Technology (GIMT) located at...