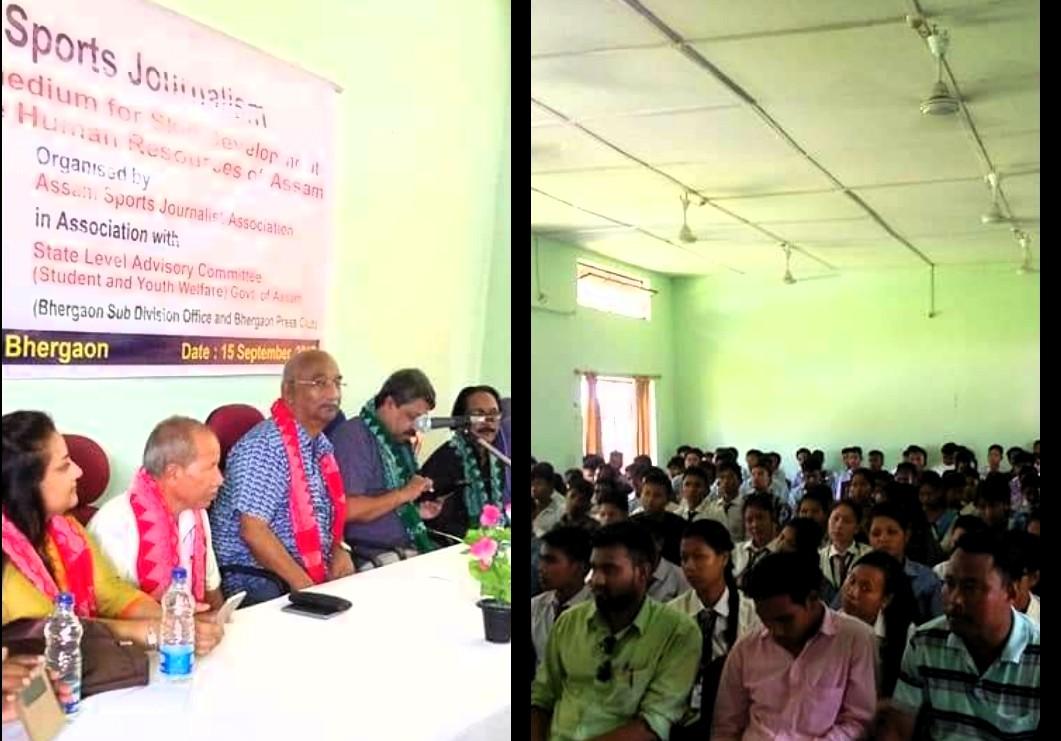 A day long seminar on sports journalism was held at the Conference Hall of the office of the SDO (Civil),Bheraon sub-division on September 15 with day long activities.The seminar titled-"Sports Journalism as a Medium for Skill Development for the Human Resources of Assam" was organized by Assam Sports Journalist Association in collaboration with State Level Advisory Committee (Students and Youth Welfare),Govt of Assam and in association with Bhergaon civil administration and Bhergaon Press Club.The seminar was meant for students interested in sports journalism and for the creation of a sporting atmosphere in the society for the promotion of games and sports and health care in villages.On the spot sports news writing competition marked the beginning of the seminar which was inaugurated by DN Hazarika,SDO (Civil),Bhergaon sub-division at 9.30 am followed by the seminar on sports journalism. Swapnanil Barua, Commissioner, Sports & Youth Welfare and Industries of Assam (Rtd) inaugurated the seminar at 10.30 am. Thanking the organizers for the arrangement of the seminar in rural Bhergaon area he said that sports journalism could play a vital role in motivating students to choose sports journalism as a career in life and to find out hidden sports talents in the villages.The seminar was also addressed by Subodh Malla Barua,president,All India Sports Journalist Federation;Prathana Hazarika of DD Sports;Pabitra Gogoi of The Assam Tribune and noted photographer Samsul Huda Patgiri.

4 Sep 2014 - 10:12pm | AT News
Nagaland wants the line of control tag over the disputed area with Assam.   Talking to reporters in New Delhi after his meeting Union home minister Rajnath Singh on Thursday, Chief...

30 Nov 2014 - 11:57am | AT News
Prime minster Narendra Modi speaks of his mind. In his address at the second and last day of the DGP-IGP conference in Guwahati on Sunday, Modi talks of his own concept of smart police.“I have a new...

23 May 2012 - 5:29pm | editor
Sudden attack by swarms of venomous spiders strikes panic among the people of Dibrugarh and Tinsukia districts during the last couple of days. One person died and several others were injured after...