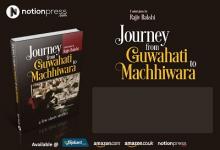 26 Apr 2017 - 11:50am | AT News Guwahati
At a time when travel literature had yet to flourish in the east and north eastern regions of India an exceptional book hits yen market with all promise. Behind the book is Rajiv Bakshi, a banker by...

No bail for Rumi Nath

28 Apr 2015 - 9:35pm | AT News
There seems to be no respite for Rumi Nath as a local court in Guwahati denied bail for the MLA who was arrested for her alleged nexus with car lifter. The Kamrup CJM court heared her bail...