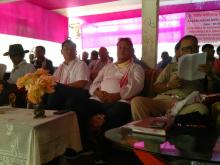 20 Aug 2016 - 10:54pm | SK Hasan
To resolve the burning issue of Assam-Nagaland border and reduce the tention among the people in the border areas, a harmony meeting was organised at Singibill Bazzar on Friday. The meeting was...

25 Sep 2012 - 3:03pm | editor
Security has been beefed up across the state following ULFA’s stepped up activities to make their presence felt. The outfit is trying to carry out a string of blast in the vital spots...