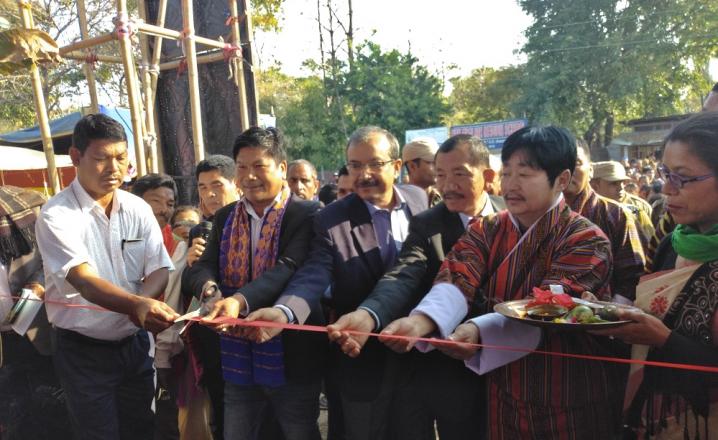 This is a fair saw visitors both India and Bhutan. The fair is organized in January third week every year to celebrate the bond that India and Bhutan have fostered over the years showcasing the culture and traditions of both the countries.

The Indo-Bhutan friendship fair has been organized to boost bilateral relations between India and Bhutan as a part of confidence building measures at Subankhata along the Indo-Bhutan border in Assam’s Baksa district since ten years. The citizens of greater Subankhata area, extremely northern  part along the Bhutan border in Baksa district of Assam has been organizing Maghw Fair since six decades where citizens from both India and Bhutan countries thronged the fair every year and taste peace and unity among society in the region. The fair, has a special significance used to be the place where Bhutanese merchants from Pemagatshel and Samdropjongkhar would go to trade mandarin,ginger, soyabean, and potatoes, among others.

Bhutanese merchants used to camp at Subankhata for months and witness the fair and recount the fun and wonders they saw to their friends and family back home. That tradition of Bhutanese going down to Subankhata continued well until 1990s. But security issues along the border changed all that. And with it died the age-old tradition although Magh fair continued to be organised on the other side of the border. Ten years ago, Maghw fair committee and members of Bhutan-India Friendship Association (BIFA) met to revive this old tradition. Bhutanese were encouraged to put up stall to showcase Bhutanese tradition and cultural programmes. And thus Maghw fair became Indo-Bhutan Friendship Fair.  During the fair the cuisine and culture, which are the best ways to build bridges, played an important part in the Indo-Bhutan mela.

Bodoland Territorial Council executive member Bijit Gwra Narzary cut the ribbon to inaugurate the main gate of the fair amidst huge crowd on the inaugural day.Indian army major based at Subankhata Lakeswar Darma inaugurated fair entry gate in the morning.

Stalls serving both Bhutanese and Bodo, Assemesse cuisine were set up for the visitors. Traditional dances during the fair provided a window to the culture and traditions of both the nation. A photo exhibition that showcased cordial relations that have existed between both nations was also held during the fair which was opened by Chapaguri MLA Thaneswar Basumatary.

The fair saw trade fair,showcase of ethnic food items,multi cultural demonstration representing from different communities which is continuing till January 24 next.

General Secretary of Bhutan India Friendship Association(BIFA) Norbu Wangdi said that the fair is bringing deep building of cooperation and understanding in between India and Bhutan.He said that through the fair both countries are gaining good relationship towards building healthy communication.He said that this maghw fair is paving the way friendship and boosting economic gaining amongst both nations.

“We (Bhutanese) are visiting the Indo-Bhutan friendship fair, which has been organizing the fair every year and makes cultural exchanges of the among communities. It is a very good gesture of unite for the common publics in between Bhutan and India. The Bhutanse visits and thronged the fair and taste ethnic food items,besides creating amusement in the region. The fair is a fair to visit along with Bhutansese cultures and dances. There is a good environment and relations among citizens of both Bhutan and India countries as peoples are living on integration. The fair has crossed six years since 2011 and peoples have been maintaining peace and harmony. Organizing this kind of fair will help revive and strengthen relation between the people of the two countries”.

Member of Bodoland Territorial Council(MCLA) and chief patron of the fair committee Phalindra Basumatary told that that the fair has been organising every year to make deep relations and cooperation in between India and Bhutan country.He mentioned that due to security reasons post 2003 Bhutan all-clear operation,the fair could not come into organise and later it has been organising every year during the magh month.He said that it is a festival where all kinds of ethnic food cuisine from both India and Bhutan country are showcased.He has claimed that the fair is getting more attractive with more thronging of visitors.

"The Indo-Bhutan friendship fair at Subankhata, Assam, to celebrate the bond that India and Bhutan, is an outcome of Maghw Fair which has a joint effort of Magh fair committee and Bhutan India Friendship Association( BIFA) members since ten years, but the Magh fair has been organizing since six decades along the Bhutan border at Subankhata. The greater Subankhata are joining the Magh fair where irrespective of caste, creed and languages have been thronged and built healthy and integrated in both countries. This is a fair where citizens from Bhutan, India are thronged and enjoyed their cultural tradition and tastes of ethnic foods during the fair. We have a good relationship in both countries that has been giving heavy participation from Bhutan itself. The Bhutanese eagerly visits this area to sell their agricultural products, but since after 2003 all clear operation Bhutan government had suspended to visit region for hardly ten years. Later, border citizens of both countries resume its relationship from 2011 and make Indo-Bhutan friendship fair, which has this year crossed ten years.The fair has in its significance draws integration of both countries as border citizens whole heartedly enjoyed ethnic cultural exchange of unity. We’ve been successful. People to people contact have increased over the years. It is heartening to see long-lost friends meet again and share their memories. The fair symbolizes much more than friendship between people of two districts of the two countries and that it is important to maintain security along the borders. Organizing such fair is important, especially along the borders as a way to facilitate greater interaction and to help build peaceful environment. The people on either side of the border have been on close terms since ages and expected that fair would further strengthen the ties among the citizens of the two neighboring countries. This is the six year for the fair and helps in cementing the relationship between the two countries by creating cultural ties”, Basumatary said.

11 Jul 2011 - 11:00am | editor
At least 120 people have been injured when Adivasi Peoples’ Army triggered a powerful blast on the railway tracks in Rangiya that derailed four bogies of the Guwahati-Puri Express on Sunday...