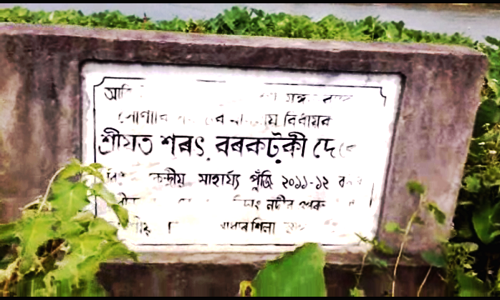 The Namrup Lalpaguri Ghat Bridge over the river Disang has been in a bad shape causing immense suffering for the commuters.

The temporary bridge is the sole route  for the people of  Namrup in Lalpaguri Ghat  which was washed away by the flood waters causing immense inconvenience to the people of Nalini Pathar ,Japihojia, Utarhundar, Duinon hundor, Borochalli, Narayan Pathar, Tiklagor, Borpatra, Nepalikhuti and  Panjabi. The incessant rains worsen the situation.

Former Sonari MLA Sarat Borotoky laid the foundation stone of the bridge in the year 2011-12. But still  the construction is delayed forcing the people of that area to urge the government to take necessary step for immediate completion of the bridge .

31 May 2012 - 7:15pm | editor
Despite sharp vigil, Guwahati still remains a transit route of drugs. Security forces seized a huge quantity of brown sugar from the Rajdhani Express in Guwahati on Thursday.The brown sugar worth...

15 Feb 2014 - 11:34am | AT News
A hard of wild elephants has been unleashing a reign of terror in Demow during the last couple of days.One person was trampled to death by wild elephants on Friday night sending shock and anger...

3 Jun 2016 - 1:07pm | Drishana Kalita
Assam’s rivers and wetlands which crisscross the state, may soon lose much needed protection under the Central Government’s new Draft Wetland Rules 2016. The Ministry of Environment and Forest,...