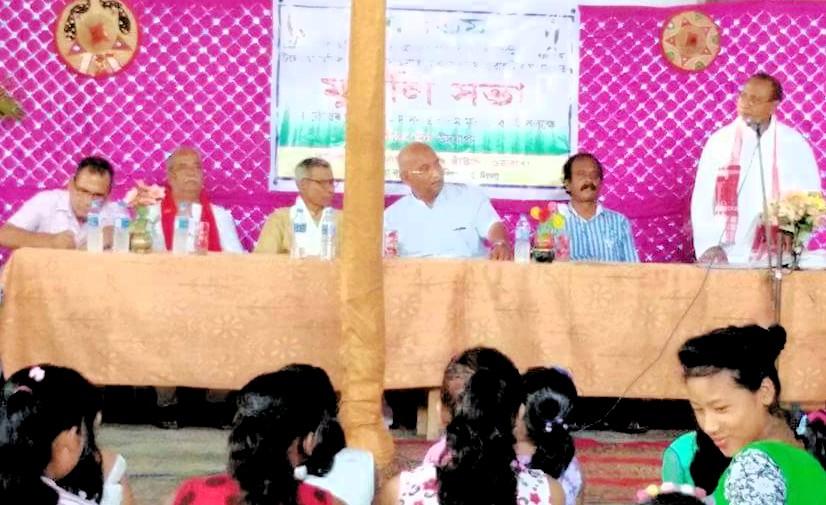 The 48th death anniversary of Bonkonwar Anandi Ram Das was celebrated at Tangla on August 4. On the occasion, two other great lyricist of Assam ie, Luit Konwar Rudra Barua and Geeti Kabi Parbati Prasad Barua were also remembered. The event was organized by Sanskritik Mahasabha, Assam Udalguri and Tangla units in association with Yuva Tirtha,Guwahati at Tangla Girls HS premises.The concluding session was held at 4 pm which was presided over by Dr.Hari Ram Das,president,Sanskritik Mahasabha,Assam Udalguri district committee.

Gyanendra Kumar Chaliha, secretary of the district unit of the Mahasabha in his inaugural speech gace a brief account of the Mahasabha in Udalguri district.He specially spoke on the five days Bongeet workshop held at Tangla recently from July 26 to 30.Sankar Das,president of Sanskritik Mahasabha, Assam attended the session as the chief guest.Attending the session as the distinguished guest,Swapnanil Barua,eldest son of Luit Konwar Rudra Barua spoke on the origin of Bongeet in Assam. He mentioned legendary Assamese scholar Dr.Bani Kanta Kakati, who had introduced the word Bongeet. Also speaking on differences between Bongeet and other folk songs of Assam, Barua said that Bongeet reflect feelings or emotions of common people of the society like peasants,boatman,fisherman etc.He described the period of 1940 to 1960 as the golden era of Assamese culture.

Sixty one children and woman of the district who had participted in the recent workshop sang three nostalgic Bongeets of Rudra Barua,Anandi Ram Das and Parbati Prasad Barua to much delight of people present.Nabasmita Medhi of Guwahati and Tulika Devi of Kalaigaon also sang a few songs on the occasion.DN Hazarika,ADC, Udalguri; Dr.Mrinal Choudhury,president and Nirotpal Goswami, secretary, Yuva Tirtha, Guwahati;Prithu Barua,secretary of the Mahasabha;Chandra Prabha Dutta, HM, Tangla Girls HS;Nabajit Das of Tangla etc were also present.Sixty one numbers of participants of the workshop were awarded with certificates on the occasion.

9 Sep 2011 - 3:40pm | Rini Kakati
Death we know is an inevitable truth of life and yet when the memory strikes its finality unnerves us and shakes us to the core. Everyone dies but not everyone lives and it can be said of Ikbal Rasul...

29 Jun 2010 - 7:39pm | editor
The Central Bureau of Investigation probing the multi crore scam in the Dima Hasao Autonomous Council gets remand of R H Khan after he was produced before a special court on Tuesday. Khan, the social...