The first meeting of Udalguri District Mineral Foundation Trust (UDMFT) was held at the Conference Hall of the Deputy Commissioner office on July 20. Richand Ahmed, Deputy Commissioner I/C, Udalguri presided over the meeting which was attended by the members of the trust including A Choudhury,ADC, Udalguri;Madhurjya Kumar Sarma,DFO,Dhansiri Forest Division,Udalguri besides joint Director of Health Services,Depty Superintendent of Police (HQ) and representatives of various government and non governmental officials.A Choudhury,ADC,Udalguri cum Member Secretary of the Trust explained about formation,management and funding of the trust in his welcome speech.He said that government of India notification in this regard was published on August 26 in 2019 which was later notified by Assam government on March 18 in 2017 specially for the sixth schedule districts in BTAD. According to him a minimum of ten percent of royalty from stone and sand mining etc will be deposited in the account of the trust to be utilized for community welfare activities for affected people living in and around the mining areas.He further said that provisions for health care, sanitation,education,woman empowerment,children welfare activities will be taken up with the available fund.The meeting took out a few important decisions regarding preparation of action plan on how to run the trust smoothly in the district.By a resolution,the meeting requested DFO Udalguri immediately to evict all illegal stone and sand mining in the district with special reference to illegal excavation and sand mining on Nonai river bed at Pachim Nalbari village near Tangla and at Garuajhar Gaonbura Basti. 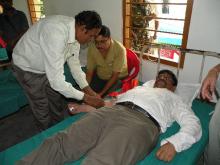 27 Jan 2014 - 4:41pm | AT News
BPF will contest in Kokrajhar and Mongoldoi in the Lok Sabha poll and will help Congress win other seats.This was what BPF president Hagrama Mohilary told reporters when he accompanied Biswajeet...

9 Jul 2015 - 2:49pm | AT News
The Asom Gana Parishad demands CBI probe into APSC scam where a section of the candidates managed to get selection for the ACS, APS and allied services for money.  Addressing a press conference...