Kudos to Dr Bhupen Hazarika as he turns 83

Today is September 8, 2008. Assam is celebrating the 83rd birth day of music legendary music maestro Dr Bhupen Hazarika albeit the birthday boy is in Mumbai. Birthday wishes are pouring in for the pride of Assam and Dada Saheb Phalke award winning singer. Several organization on Monday are celebrating the day across the state.

A special screening of a documentary film on the life and works of, produced by Surjya Hazarika was held at the auditorium of the Assam Handloom and Textiles department office on Sunday. The documentary film titled Bihangam Drishtit Dr Bhupen Hazarika throws light on the life and works of the Phalke awardee.
Many eventful moments of Dr Hazarika’s life have been covered in the film. The English version if the film titled Dr Bhupen Hazarika: A Living Legend was screened at the St Adrews Hall of London south Gate in July last and won accolades from the viewers. 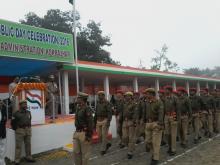