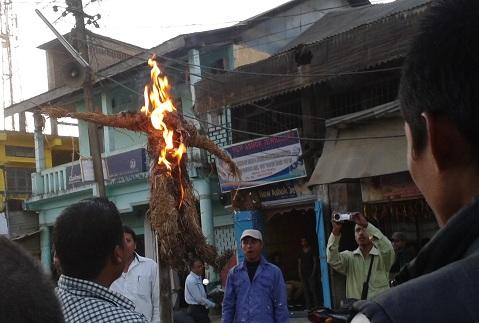 Protesting continious price hike and inflation, Sivasagar District unit of the All Tai Ahom Student Unoin (ATASU) on Tuesday burnt the effigy of Food & Civil Supplies Najrul Islam at Dhudar Ali, in front of Nazira Natiya Mandir. Moyur Borgohain, state general secretary of ATASU, Prasanta Borgohain and over 100s other ATASU activist were gathered and shouted slogans against the supply departments. Mayur Borgohain  said that if the same situation would go on and the state govt. will not take any urgent action to control the inflation and price hike than the orgaisation will organised statewide protest against the state government.

29 Apr 2017 - 11:22am | AT News
The ULFA(I) rebels camping at an undisclosed dense jungle celebrated Rongali Bihu recently amid the three decade old armed struggle for a sovereign Assam. The video the outfits sent to Assam Times...

15 Jul 2007 - 3:42am | editor
Arunachal Pradesh is one of the naturally beautiful states of India situated in the foothills of the Himalayas and there we have the Pakke Wild life sanctuary which is fast developing as a hot spot...