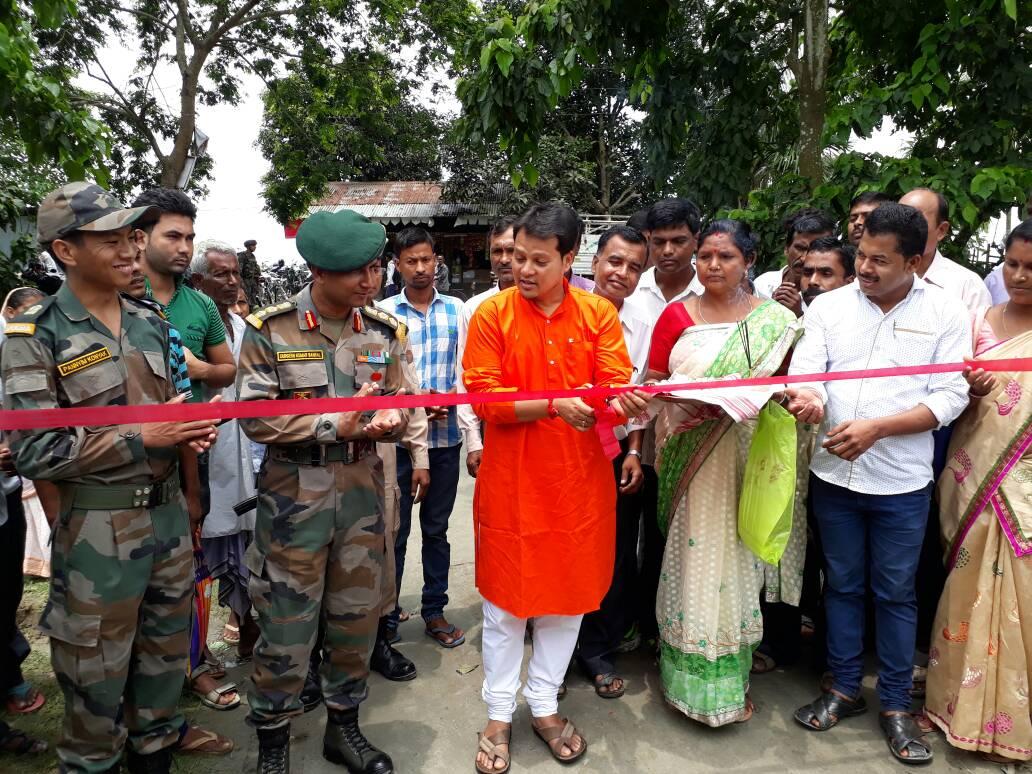 In a series of medical camps conducted by Indian Army under operation Sadbhavna, Army camp Deomornoi of 14 Dogra Regiment of Red Horns Division under Gajraj Corps conducted a medical camp for the people of village Char Chuburi and nearby areas of Char Chapori which are remotely connected by road on June 19.The medical camp was inaugurated by Guru Jyoti Das,MLA,in presence of Commanding Officer of 14 Dogra Regiment stationed at Udalguri.Five Army medical officers including one Dental Surgeon from Red Horns Division and three doctors including one eye specialist,two nurses and eight para medical staff of a mobile medical unit,Mangaldai of Assam government were present on the occasion.Free medical check-up and distribution of medicines were carried out for 908 patients.The beneficiary included 310 males,406 female and 192 children from eleven villages.In addition to distribution of free medicines,Army camp Deomornoi also distributed crutches and sticks to needy persons.A cultural programme was also organized by Bar Chuburi Gaon Panchayat where Army band also performed for local people.On the occasion Army officers had an interactive session with youths and people motivating them to join Indian Armed Forces.The villagers expressed pleasure attending the medical camp as they had been immensely benefited from the interactive session for the upcoming recruitment rallies.The samaritan activity by Indian Army paved the way for greater harmony between villagers and Army.

14 Jul 2007 - 1:15am | Rituparna Goswami Pande
India’s Northeast is a rainbow land blessed by nature’s bounty. Its colourful, it’s mysterious and it boasts of a medley of diverse people. The northeast is an ethno cultural...

7 Oct 2015 - 6:36am | AT New Delhi
The Supreme Court has rejected a plea for Central observers to monitor the verification process of NRC application. A division bench of the Court comprising Justice Ranjan Gogoi and Justice...

Mainstream discrimination: Will the prisoners of conscience awake?

10 Mar 2008 - 3:47am | editor
Much ink have been spilled on the racist and indecent attitudes in Delhi and its neighbouring areas towards those hailing from the seven sister stats and Sikkim but these refuse to die down. Over the...