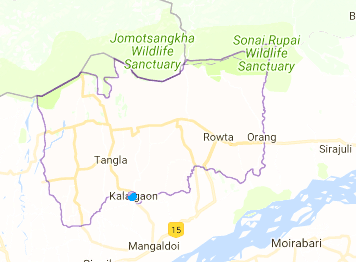 Udalguri District Journalist Union (UDJU) submitted a memorandum to government India for immediate action regarding a few long pending public interest related issues.The memorandum was presented by senior journalist Jayanta Kumar Das,president and Dilip Baruah,secretary of Udalguri District Journalist Union to Shiv Pratap Sukla,MP,(RS) at Udalguri Circuit House on June 10 in presence of Sadhana Hojai,DC, Udalguri; Narayan Deka, MLA,Kartik Boro,president,Udalguri unit of BJP and other civil and police officials.The MP had been the chief guest at Udalguri during "Sabka Saath,Sabka Vikash Sammelan" representing government of India.The memorandum mentioned immediate need for completion of the dilapidated state of NH-15 (Extension from Rowta to Udalguri.The road was being constructed by Simplex India Ltd under NHA,which was part of the package containing six such road projects in NE.Only four such schemes under the package had completed and remaining two including NH-15 (extn) were not sanctioned thereby stopping construction activities.

The memorandum requests government to sanction the road under a new package from Rowa to Udalguri.The union also request government to declare Bhairabkunda, Udalguri and Samrang as Trade Centre for international promotion of commerce and tourism between India and Bhutan.Thirdly,the memorandum said that People of BTC had been deprived of constitutional fundamental rights by not able to exercise their voting right to select local Panchayat members,as Panchayatiraj system has not been implementing here in BTC but VCDC representatives are selected by ruling parties.

In the absence of Panchayat system,funds never reach village people, misappropriated by brokers or diverted to other departments.Journalist union urged government to introduce Panchayat system in BTC.Lastly,under Didayal Bidyutikaran Yojana and Rastriya Krishi Sichai yojana,people of Udalguri have been suffering as there is no office or officers in Udalguri and everything being controlled or supervised by neighboring Darrang district office from Mangaldai.Full time offices at Udalguri will serve the people better.UDJU requested government to establish separate offices at Udalguri.

7 Jul 2010 - 2:31pm | editor
The Assam government will set up a state vigilance commission to deal with the corruption cases. The decision to set up this panel in the line of the Central Vigilance Commission was taken at a...

8 May 2013 - 4:02pm | Anup Biswas
The Kuki Students' Organisation, (KSO) Assam, strongly condemned the allocation of ST(H) quota to Smti. Banti Talukdar in the recently announced ACS result.The name of Banti Talukdar came out in the...

10 Feb 2015 - 4:41pm | Prasanta Baruah
Immediately after he ensured a massive victory in the assembly polls chief minister designate Arvind Kejriwal vowed to end corruption in the public life. Talking to reporters at the party...