Amanisha borah of Raidongia, Nagaon brought laurels to Nagaon as well as to her birth place Raidongia by bagging  6th position in H.S examination,the results which were declared on Tuesday. Amanisha Borah,a student of Renaissance Junior college and daughter of Mukut borah and Momi borah secured a total of 472 marks in Arts with letter marks in English-85, MIL- 96, Education- 96, Logic & Philosophy- 93, Sociology- 98, and economics- 97.

As the news of her oustanding performence in HS exam tickled in,a large number of people from different locations gathered at her residence to greet on her success.people of Raidongia celebrated the day by bursting crackers,beating dhols etc.

Talking to Assam times, Amanisha said, "It is the happiest momoment of my life. Before exams,I used to study about 8 to 10 hours a day. My parents,teachers helped me a lot and i am specially thankful to them. My ambition is to become an administrative officer to serve people.I will admit degree at present at Nowgong college  taking English as major subject."

The Raidongia Unit of AASU,Dolonghat Block unit of BJP,ABVP Nagaon wing felicitated Amanisha on her way home from the college on Tuesday.The locals with several organisations also brought out a procession in Raidongia area. 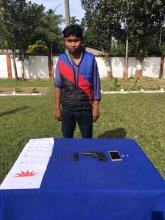 7 Sep 2010 - 12:03am | editor
A heavy downpour brings untold misery for Guwahatians in the form of flood and massive traffic jam. Many parts of the principal north eastern city are flood half an hour after it lashed Guwahati...